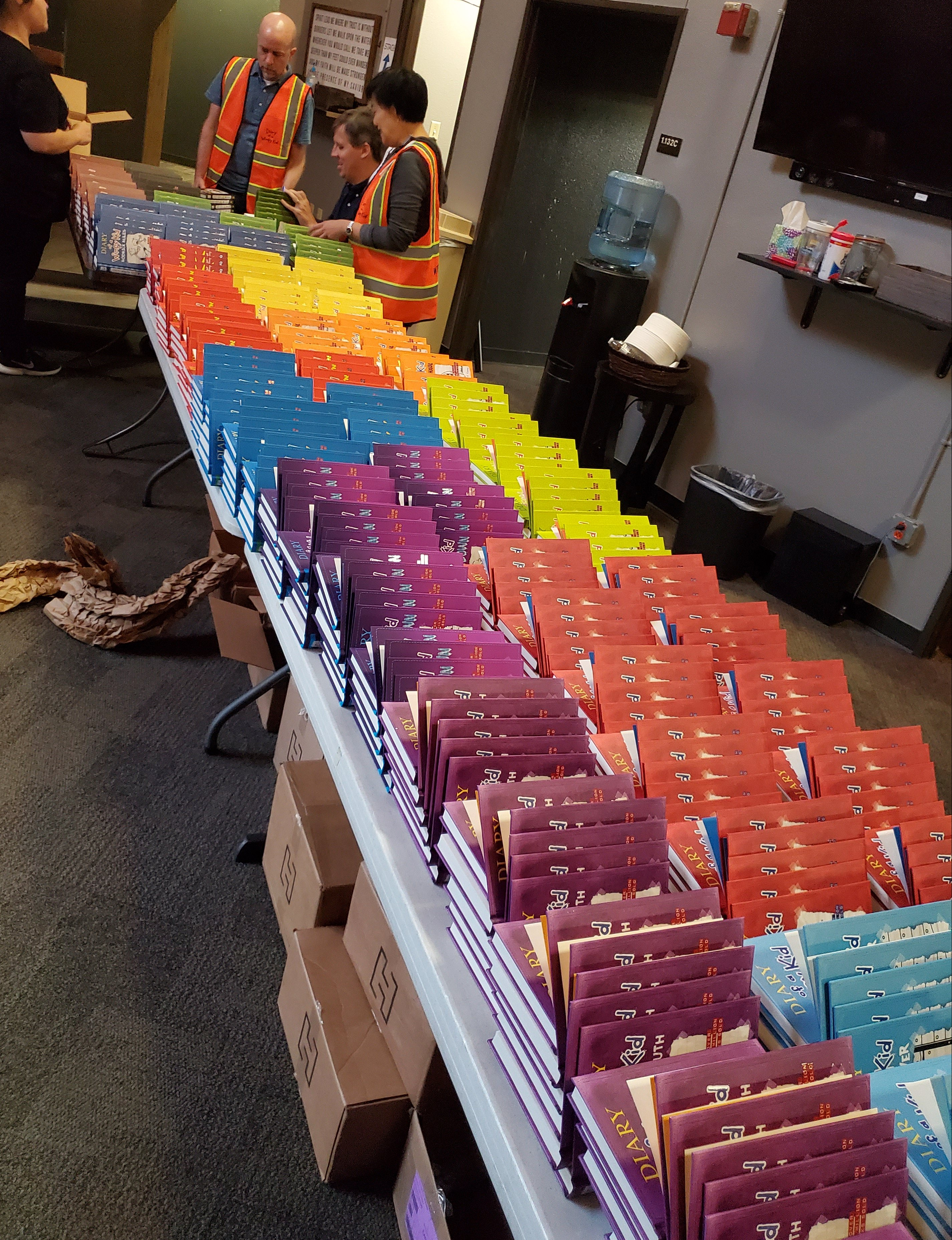 At the beginning of Tuesday night’s Wrecking Ball release event, Jeff Kinney said that after 14 years of straightforward tours, he wanted to mix it up—and that’s exactly what he did. The show pulled out all the stops and more—raising the bar for interactive, kid-oriented fun that rewards longtime super-fans and newcomers alike. With a set that took a full afternoon to set up, a wheel of activities to drive the action, and plenty of goofy, unpretentious fun, the 2200 people in the audience were in for a rollicking ride.

Almost every element of the elaborate spectacle involved low-stakes, high-humor audience participation. Dumpster Dive Bingo brought an eager search party onstage to rifle through creepy dolls and other detritus while audience members raced to complete their bingo sheets for a prize. A drawing demo in which a young artist guided the pen of a blindfolded Kinney managed to make cartooning seem both wonderfully accessible and hilariously challenging at the same time. And an unforgettable dance-off pitting six parents against each other earned an exclusive Skype visit for one lucky class. Not surprisingly, the prize went to the parent bold enough to get down on the stage and rock “the worm.” The show’s zany, collaborative energy perfectly suited the audience for these particular books, but in a sweet, earnest moment, Kinney also took time to reward several 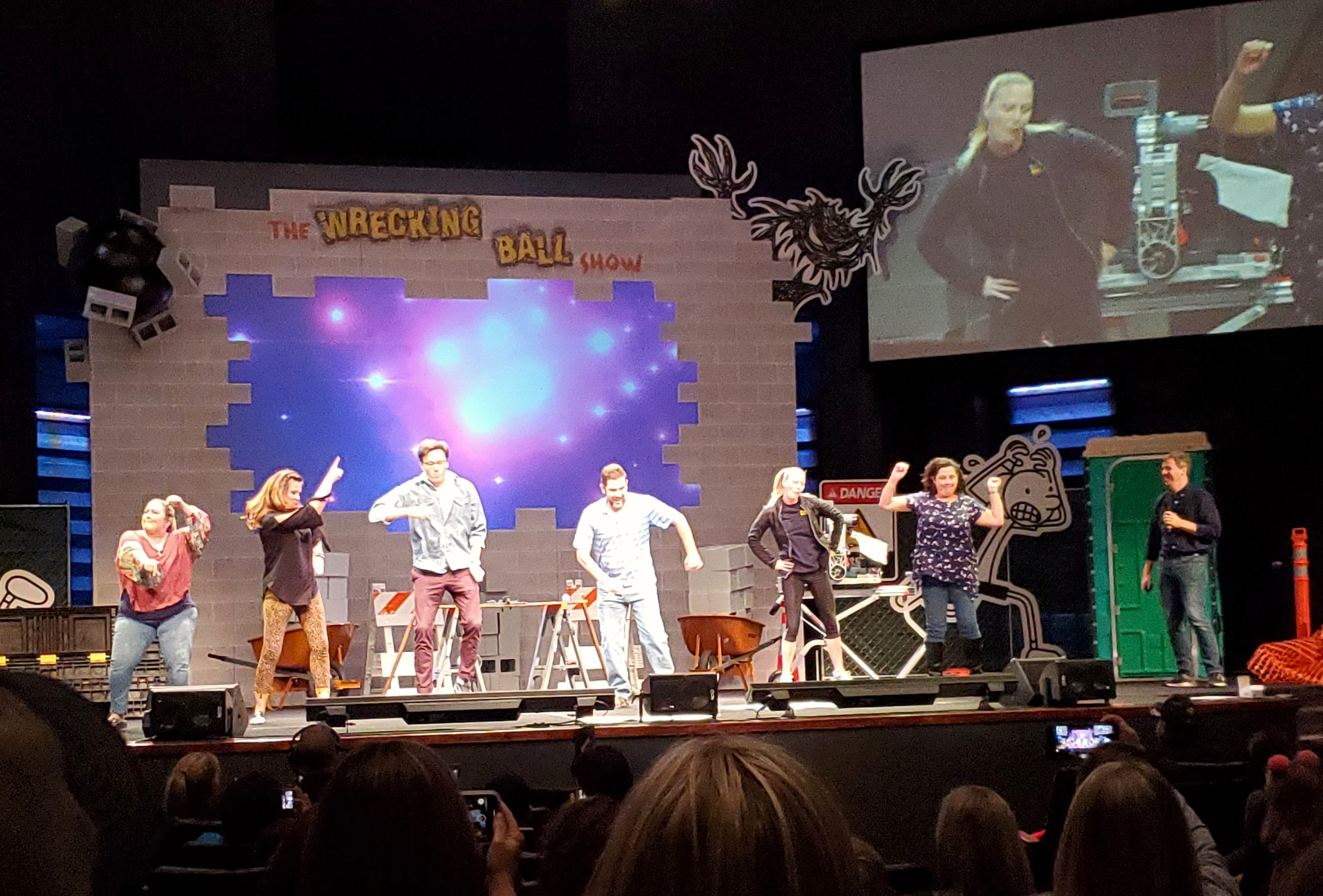 attendees—two kids and a librarian nominated by their schools—for being awesome friendly people. It was the perfect way to anchor the event within our community and celebrate the spirit that brought everyone together around these books in the first place.

I have the privilege these days of attending certain events wearing two hats—as a bookseller and a parent—and I can tell you that my second grader, who devoured the new book tonight before the show, loved every moment of this wildly kid-centric event. As someone still relatively credulous (and naïve to theatrical trickery), he bought into the entire premise, hook, line, and sinker, carefully pondering questions all the way home like, “Do you think that guy who got stuck in the porta potty is still in there?” and “that wrecking ball that crushed that car had to be made of paper or something, right?” and “that vehicle that knocked down all the blocks at the end was really part of the show, right?” Needless to say, it was all a huge hit that made reading seem very, very cool. 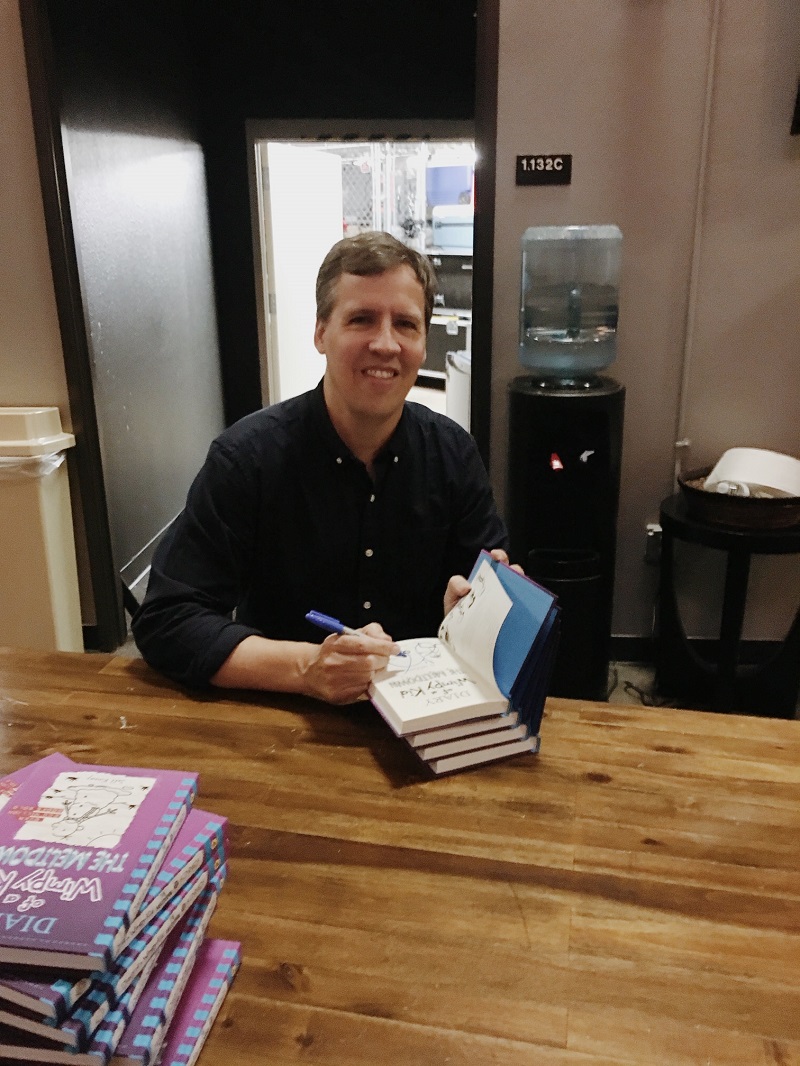 Now, you don’t need to have a Kinney-sized tour budget to have a big impact, and not every event needs to be a riotous activity-fest from beginning to end. There are all kinds of entry points into rewarding book-themed interactions with young readers. But I do find myself having more and more conversations lately, both with authors and booksellers, about how to break out of a standard event model and better center children’s book events around their intended audience. Children’s book events don’t always need to be fully designed around young audiences (some are really intended for authors’ friends and family or educators), but when the objective is to engage kids, then perhaps we need to think a little bit more like one. Kids love to feel like they’re part of something—and that you’re there just as much for them as they are for you. They also don’t necessarily love sitting still, so just breaking things up and changing the pace makes a huge difference.

I have to say that, like Jeff Kinney, a number of Austin authors have also been shaking up their release events and thinking outside the box, and we’ve been doing the same. Christina Soontornvat recently launched her Diary of an Ice Princess series at the store, leading kids in a fun (not too risky) game of Truth or Dare in addition to a rousing rendition of “Cold Town Road.” And just this past weekend, Cate Berry—chicken hat firmly on head—led an adorable Chicken Break to celebrate the release of her new picture book of that name. What could be more fun than that?

I came away from the event tonight thinking we should take this show from Jeff Kinney as a challenge to keep raising the bar and meeting kids where they are. After all, what’s a kids’ event if it doesn’t let kids be kids?

Omg teachers and librarians you must have @cberrywriter come speak with your students. This was the most fun book launch ever! Look at these adorable chickens making a CHICKEN BREAK! pic.twitter.com/S71YU2Ahws