In response to the recent New York Times article, Paging Big Brother, further exposing the proliferation of counterfeit books being offered for sale on Amazon.com, the company made these observations by way of rebuttal and explanation. 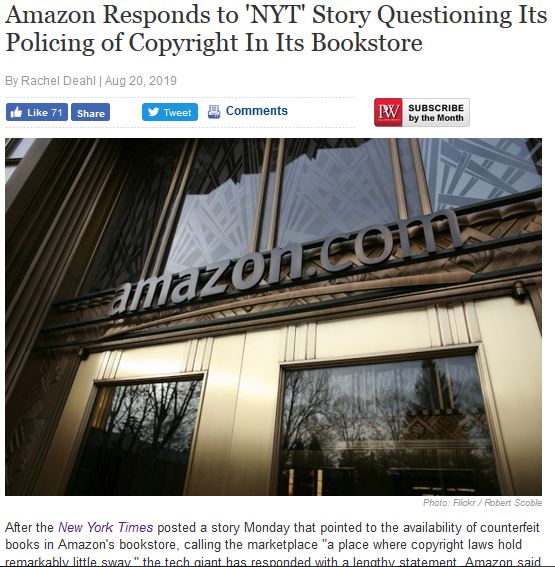 According to Amazon, and as reported in Publishers Weekly, “The solution for ensuring that no alternative books to titles that are still protected by copyright appear on Amazon’s—or any other bookstore’s site—is ‘a single source of truth for the copyright status of every book in every country,’ Amazon said. Such a source ‘would help all booksellers,’ Amazon added.”

There are two sources of these counterfeit (aka ‘alternative’) books. One are editions imported from countries such as India, which have different copyright laws than the U.S., and then are being illegally sold in the U.S. on Amazon. Second, there are pirated editions of copyrighted books being produced, usually though OCR digital scans which mangle the actual language, and which are subsequently published on Amazon’s Createspace platform and then sold. I have mentioned this situation here before. Some of these pirated counterfeits produced on Createspace are carried over into book industry databases such as iPage which feed the websites of some independent bookstores.

Independent bookstores, except for the pirated materials infecting industry databases through Amazon, do not have a problem with counterfeit books and would not be helped by “a single source of truth for the copyright status of every book in every country.” Nonetheless, in keeping with this new atmosphere of amity and mutual support which Amazon is clearly looking to establish between itself and all other booksellers, it is only right to return the favor and offer some guidance for them regarding these counterfeit books.

Here is a best practice that would help Amazon manage its two-pronged counterfeit book problem without having recourse to a highly complex international copyright law improbably materializing at some point in the distant future, particularly as that single source of copyright truth would not have any impact on the primary source of the problem, pirated materials published on Createspace.

Independent bookstores keep it simple. They are retailers who carefully curate the books in their store inventory. They purchase them from established book industry publishers and wholesalers, as well as supporting in person local authors who are distributing their own titles. Amazon, apart from being a retailing platform, owns publishing houses, a self-publishing platform integrated into Amazon.com, warehouse distribution systems, web hosting platforms, a marketplace for third-party vendors to sell their wares on Amazon.com, a proprietary eBook platform that is dominant in the marketplace, a dominant audiobook platform, a used book dealer consortium which sells through Amazon.com, and so on. If Amazon left publishing to publishers, and left off looking to leverage its monopolistic vertical assets to attain horizontal growth and monopolistic dominance, its problem with putting counterfeit books out into the book retailing ecosystem would vanish. It’s that simple and it would benefit all booksellers, which is our mutual goal.

5 thoughts on “A Solution to Amazon’s Counterfeiting Problem”