Ah, friends. We recently had a bone-rattler at the bookstore, one of those terrible (and fortunately rare) interactions that makes us wonder why we ever got into retail in the first place. More on that in a moment. Fortunately, it came on the heels of two amazing, wonderful interactions that make us deeply grateful to have a little store in the heart of our community.

First, the bad news. We received a call from an online customer (who lives on our state but hasn’t visited our store in person) who mistakenly thought our website had charged her credit card twice for a pre-ordered book. It was an understandable assumption; her credit card activity showed an authorization for the $21 amount, and then the $21 showed up again the next when the credit card charge actually processed. She thought the authorization and the charge were both taken out of her account. (In fact, it would have been impossible for the website to charge her twice for the same order; once paid, the balance goes to zero. But she wouldn’t have known that.)

One of my staffers—who is the soul of grace, calm, clarity, and kindness in any customer interaction—tried to explain this, but the customer cut her off abruptly with unkind words and a demand to talk with someone “who knew what she was doing.” It was my day off, but of course when my staffer contacted me about the exchange, I called the customer back right away, hoping to clarify the misunderstanding. What transpired was a truly shocking conversation. I was yelled at, accused, disbelieved, and pretty much hated for 10 solid minutes. I promised to cancel her order and refund her money, as she demanded, but that didn’t appease. She was convinced I was keeping the “double order” money—which of course didn’t exist—for myself. The hostility in these phone calls and the assumption of malfeasance rattled both my staffer and me for the rest of the day. 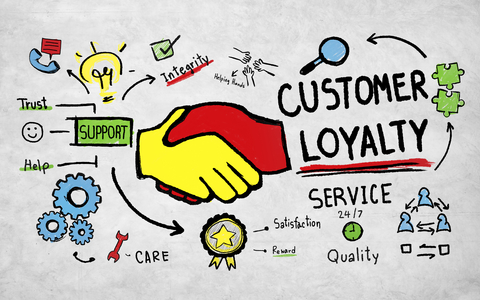 As world problems go, this is a very small one, but it was icky. Most of the time, bookselling is a lively, fun, collegial realm, where customers quickly become friends, or at least friend-ish, people you don’t hang out with outside the store, but who feel like friends whenever they walk through the door. A bookstore can be like Cheers (without the beer).

It’s hard to know that there’s someone out there who’s carrying bad feelings about my bookstore. And in this case, that’s unfixable, so we just have to move forward. Luckily, as I mentioned at the beginning of this post, the awful exchange came on the heels of two interactions so generous and lovely their memory can douse the ick like a tidal wave over a sputtering candle.

The first lovely interaction was a simple but significant gesture of support: on a very slow January day, one of our longtime customers sent her colleague into the store to purchase $20 gift cards for her 29 employees. She wanted not only to support her local indie bookstore, but to make tangible to her employees the value she personally placed on supporting community businesses. I was so touched by this thoughtful act; every single one of those gift cards means something to an independent bookstore, and to buy 29 of them! That was really something. 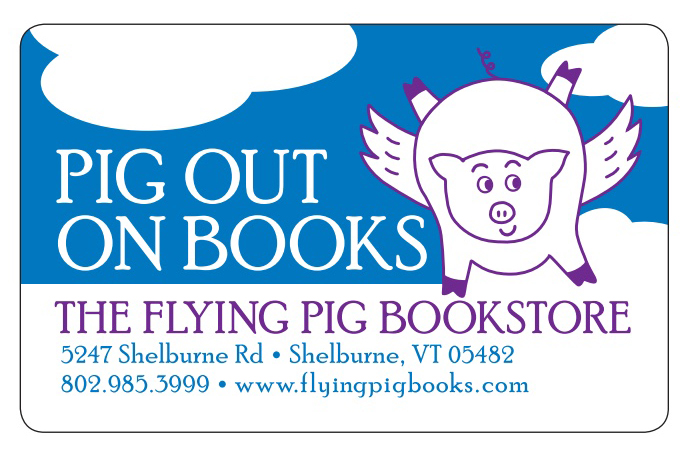 The second was the best Christmas present I received this year. In the mail arrived a padded envelope, hand-addressed with a return sender’s name I didn’t recognize. Usually, this would herald a promotional package from an author (which is a perfectly fine kind of package to receive (especially if we love the book), but a common occurrence. This was something altogether unexpected. When I opened the envelope, a family-photo holiday card and a gift-wrapped package tumbled out. At first, I was confused because I didn’t recognize the family—and then I looked closer.

The pictures on the card were of a lovely family, all redheads, and suddenly I recognized them: a mom and dad and their two little boys who had been in the store back in early fall. They were traveling across the country from California in an RV and were visiting Vermont in September after several months on the road. They happened upon the Flying Pig and came in, browsing and reading books together one sunny afternoon. We chatted a bit in the bookstore, and they bought a book or two for their utterly adorable children and headed out. A half-hour later, when I closed up shop for the day and went next door for dinner with a friend, we ran into them on the restaurant porch. Friendly hellos turned to real conversation, and we spent an hour or so talking with them about their travel adventures and our various creative activities. The boys, ages 2 and 4, were extraordinarily fun to talk to; not only were they unusually articulate for their ages, but they were clearly good friends to each other and were kind little people.

Before we parted ways, I ran back to the store and autographed a couple of my picture books for their ride home. They were sweetly appreciative; we said our goodbyes, and that was that.

Until last week. This package! The brown Kraft gift wrap was finger-painted by the boys: 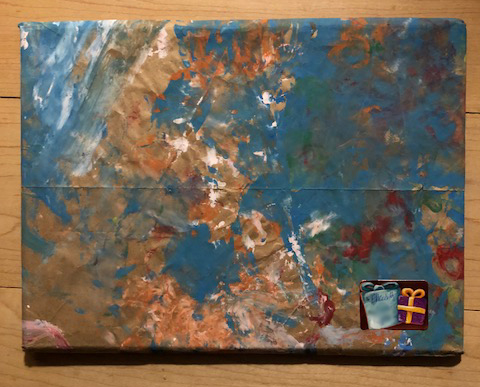 Doesn’t this look like a view of the earth from space?

Suffice it to say that this child is a serious chef! From the photos, it’s clear that he uses real kitchen tools and equipment (supervised, of course). He chops, slices, pours, and grinds. He sautèes, bakes, and roasts. He organizes the refrigerator with labeled areas for his proteins, dairy, greens, and vegetables. He regularly cooks meals for the whole family and someday wants to have a restaurant to cook for all of his friends.

The photos are brilliant and plentiful of this family and their small chef. One of my favorite photos is of him clutching a stalk of Brussels sprouts at a produce stand, illuminated with the kind of joy most boys his age would show wielding a light saber. The other is a close-up of his chubby little 4-year-old hands expertly rolling sushi with a bamboo mat. Honestly! It’s like seeing Einstein as a preschooler, doodling numbers in a dreamy haze of genius. I wouldn’t be at all surprised to read an article about him in 15 years, a young chef opening his first restaurant at 19, or creating a program to feed people in hunger.

These parents are making the space and time to help their child pursue a great passion. They have given both boys the experience of traveling around this wildly varied country at a thoughtful, human pace. And they sent a glorious thank-you to someone they met months ago at a little bookstore across the country.

There are no words to express how moved I was to receive this unexpected bounty, and what a balm it is to look at L’s happy cookbook when the wind has blown in the wrong direction on an uncharacteristic rattly day.

2 thoughts on “‘Twas the Best of Customer Days, ‘Twas the Worst….”