For most of the 13 years I’ve had my bookstore, I’ve been on a continual quest for affordable fixtures, scouring Craigslist and other classifieds for a deal. Anytime you’re looking to significantly increase your inventory, you first have to have a place to put all those new books. Preferably that place will be on sturdy commercial grade bookshelves, which can be incredibly expensive, especially once you factor in shipping something that large, bulky, and heavy. The shipping can cost as much as the fixtures! This is why most of Spellbound’s fixtures have been homemade, accented by occasional tables purchased at the local Goodwill. In November, however, I got an early Christmas present from a bookstore in a neighboring county. Blue Ridge Books, less than an hour away from my store, was moving into a beautiful new space just before the holidays and had some extra fixtures from the old space to sell. And not just any fixtures—these were custom-made, top-of-the-line bookcases from Franklin Fixtures. The kind of fixtures I’d window-shopped online and dreamed about for years but could never afford new. And they were all on wheels!
As any bookstore worker knows, fixtures on wheels are a gift straight from heaven when you need to make room for a big crowd at an event, and they save lots of time and back strain when it’s time to re-arrange store sections.
I was beyond thrilled to find that Blue Ridge was selling these fixtures at extremely reasonable prices and, since our stores are so close, I didn’t have to pay hundreds of dollars for delivery. I just rented a moving truck from Enterprise for about $80 and headed on over to meet Allison, co-owner of Blue Ridge Books, to load up my goodies. And for the most part, it went smoothly… with just a couple of hitches.
Neither of us had ever dealt with a lift gate before. Just flip a switch and a big metal platform starts unfolding from the back of the truck, ready to act as an elevator to lift your cargo up to truck bed! It’s a truly wondrous invention, once you figure out how to get it moving. We spent about 20 minutes on that. Turns out that you have to do the last bit of unfolding manually and (surprise, surprise) even that last little edge of the gate that’s able to lift thousands of pounds is really REALLY heavy. But we finally got it working and tested it out and were ready to load the first bookcase into the truck.
We rolled the first lovely double-sided wheeled bookcase onto the lift gate, held onto it while it rode up to the truck bed, rolled it to the back of the truck, and waited a minute or two to make sure that it seemed stable and wasn’t going to roll back out again. Satisfied, we headed inside to get the next fixture.
Note the used of the word “seemed” above.
As Allison and I were moving the second bookcase toward the bookstore’s front door, I heard what sounded like a faint rumble and looked up just in time to see my beautiful new bookcase fly out the back of the truck and hang suspended in the air, like Wile E. Coyote over a canyon, for just a split second before going kersplat! on the asphalt.
Needless to say, the bookcase was not so lovely after that fall. Allison was kind enough to tell me to just take another one in its place. She thought she could find someone to put it back together another time and sell it for less or perhaps donate it.
After that debacle, I moved the truck so that it was very definitely facing downhill, meaning that gravity would be in our favor, and we recruited another helper to stay in the truck and stand guard. When everything was on the truck, we secured it all with enormously strong cables once used to tie down café tables and it was smooth sailing from then on. 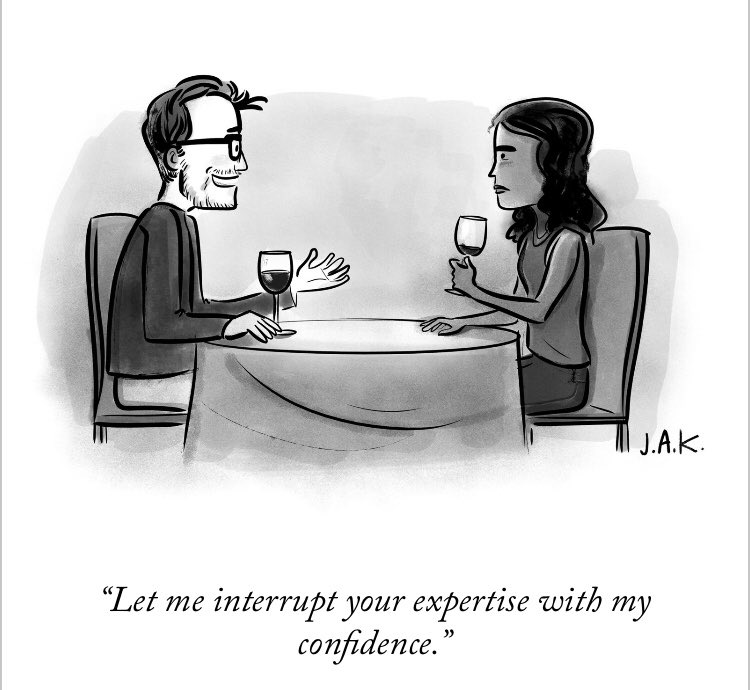 Cartoon by Jason Adam Katzenstein in The New Yorker

Speaking of smooth sailing, there is a frustrating postscript to this tale that will be familiar to many female professionals out there. Allison donated some of her bookstore’s remaining fixtures to a local middle school library. A group of maintenance men from the school system came with a big open truck to transport all of the fixtures, and Allison found some rope and offered it to them, warning them about the propensity of these fixtures to roll. But they said they were used to moving things, they knew what they were doing, and that it was fine. Then one of the very large (very expensive) magazine racks went sailing off the truck and was damaged beyond repair. Who could have foreseen that?
Morals of the story:
Gravity is your friend—until it isn’t.
Listen to people with direct experience when they try to help you.