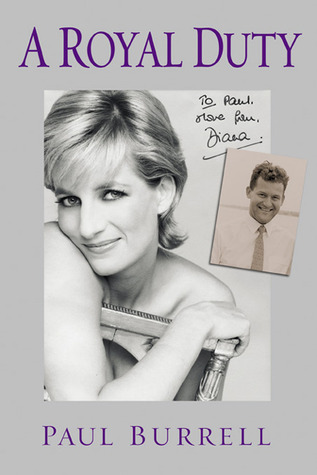 The way I see it, certain necessities of the publishing business tend to follow a downward cycle beginning at necessary, trending to overused, and ending at being a source of inconvenience, money loss, and petty annoyance. We all know we need Strict On Sale dates for high-profile frontlist releases, for example, but do books that virtually no one is anticipating need them too just so that they can keep the big titles company on the holding shelf?

Here’s another example of overusing a legitimate policy. Some years ago there was a rash of secret embargoed titles that buyers were asked to buy blind because their content was so highly charged that nothing about them could be revealed, and which could only be purchased in carton quantity. When I found myself, in 2003, the flummoxed possessor of a carton of a tell-all biography by Princess Diana’s butler, I knew that I would not be buying blind again anytime soon. Stores around the country shared my conviction that publisher credibility for this sort of thing was in the sewer. The practice dried up.

Still, we are an inventive industry and fresh ways to abuse our credulity still crop up. I’m thinking of the call I got from my Hachette rep, literally made from a soundproof room, to swear me to silence regarding huge news of a new Twilight book, information no one could know about except me, and the full details of which even she did not possess. The result? I ordered in bulk and was thus the proud possessor of several cartons of the Twilight edition that had a version of itself on the flip side in which a search-and-replace operation for names and pronouns inverting the gender, along with a handful of cursory details, had converted the story into something not even our most most diehard Twilight fans had any interest in buying once they understood what the book was. 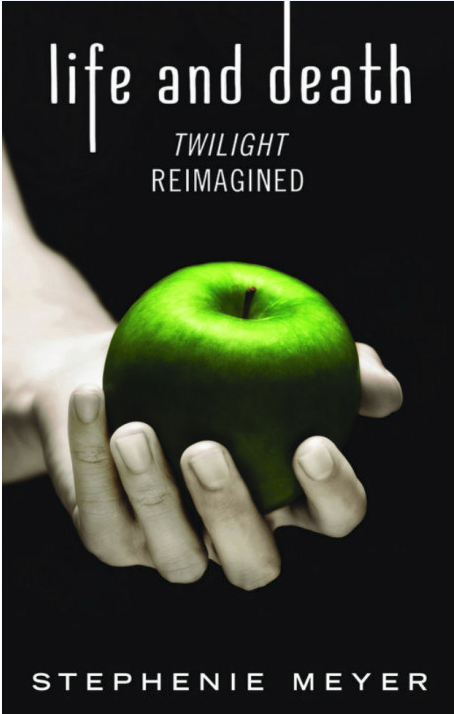 The newest wrinkle in stretching industry practices into the realm of unnecessary time and resource wasting involves title specific, signed embargo agreements made to protect intellectual property from the horrors of an early leak. This practice arose to prominence with the last four books in the Harry Potter series, which absolutely needed book-specific strict on sale agreements, with secure environment instructions.

Things have steadily slid downhill from there to the point where in November I received two separate urgent emails on the same day, both imploring me to sign single title embargo forms, one was for Star Wars Rogue One books and the other for Lego Batman books. I could kind of see the Rogue One secrecy issue but the Lego Batman situation strained my sensibility.

First of all, bookstores are run by competent, fairness-minded professionals, and when asked to keep books with strict on sale dates from the selling floor until release date, I assume that they do that. We certainly take all strict on sale date instructions, including secure environment details, very seriously at DDG. One single binding agreement from a publisher per year is sufficient, however. Individual titles do not need individual agreements, with very rare exceptions. I was unable to see Lego Batman books as meeting any kind of rare and exceptional criteria.

Here is a portion of the agreement. 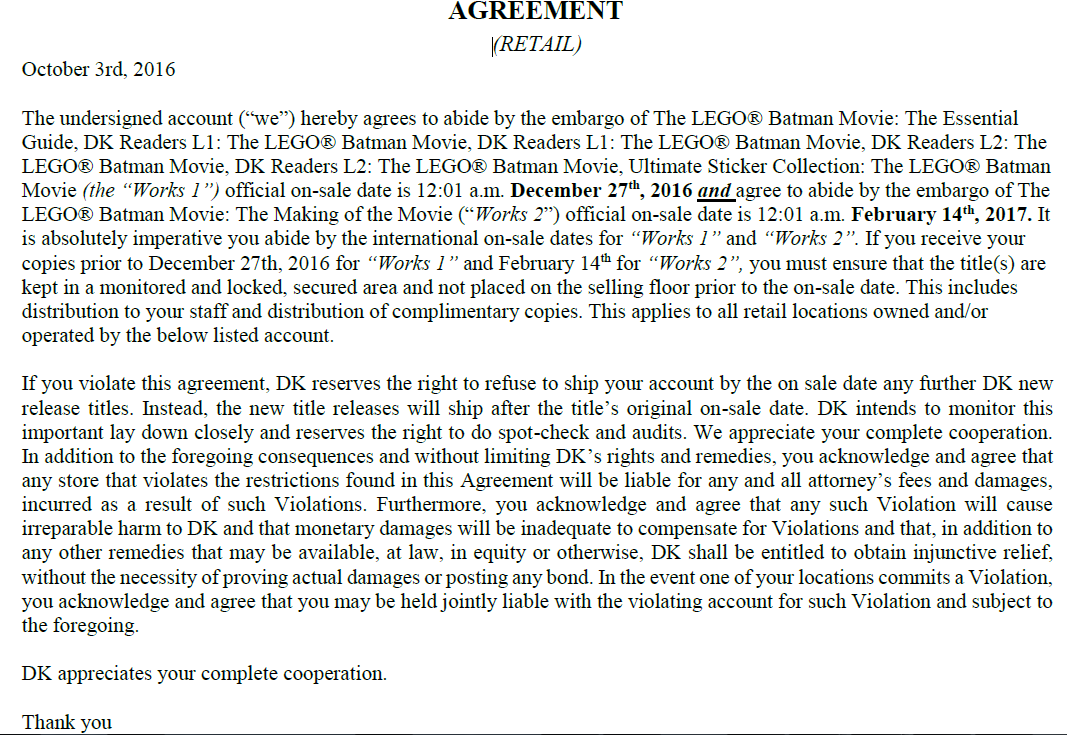 Hmmn. “Furthermore you acknowledge and agree that any such Violation will cause irreparable harm to DK and that monetary damages will be inadequate to compensate…” One does wonder what would be considered adequate compensation, and if that involves first-born children.

In any case the idea that anyone on our staff was even remotely inclined to violate the on sale agreement struck me as very dubious. I called my Penguin kids’ rep and learned that the publisher and movie producer did not share my view that adult book professionals were not in dire danger of spilling the beans on any details found in Lego Batman books. She related to me that the sales meeting about the books constituted an extreme security event in which cell phones were left at the door, even more sharply worded documents were signed, and I even got the sense that, for extra security, sales, marketing and publicity reps were made to attend in their underwear to make sure no bugging was taking place. 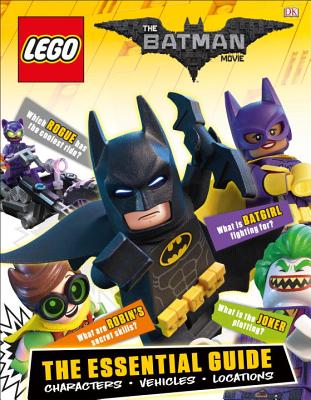 This seemed ludicrous to me and so I queried my staff as to how they viewed this issue.

Kenny: Okay, so concerning the Lego Batman books which we stored in our locked storeroom, aka the bat cave, how tempted were you to violate our security measures and tear open the sealed boxes, peruse the contents, and then violate their secrecy?

Karin: I would have liked to but I was too busy shoveling snow.

Konner:  When it comes to bookselling just consider me the Alfred of the Bat Cave, I keep Batman’s secrets.

Eliot: Can the intellectual bankruptcy of the whole capitalist enterprise be made any clearer?

Since one of our plush animals, a large Squishable bear named Hank, also helps with receiving at DDG, I asked Hank too. 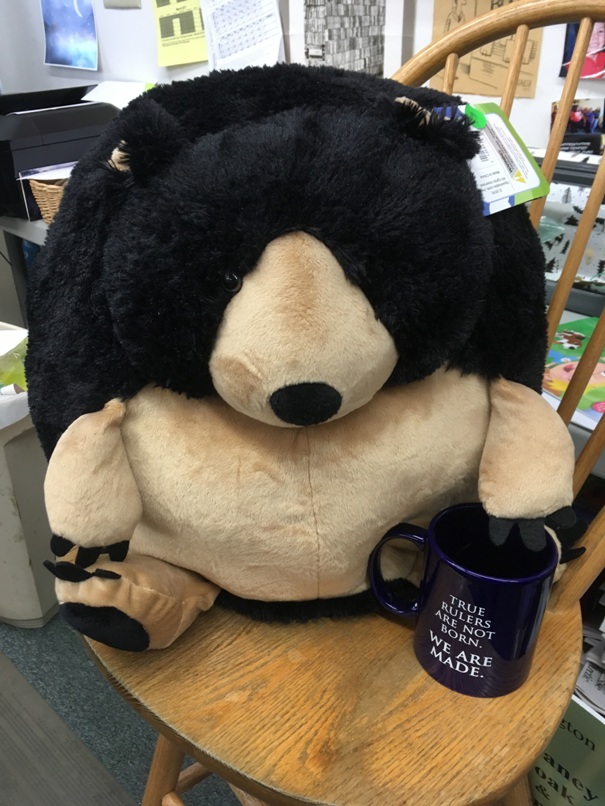 Hank: Oh, I totally violated the agreement. I took pictures of key pages and covers and shared them on Skwuff.

Kenny: What! First of all, what is Skwuff?

Kenny: I can’t believe you did that. What were you thinking? Did you consider the repercussions?

Hank: I’m a plush bear, what kind of repercussions should I be concerned about?

Kenny: Okay but you represent the store. Did you consider the repercussions here? That violations would cause “irreparable harm”?

Hank: I did but the opportunity to score points on Skwuff was too good to pass up. 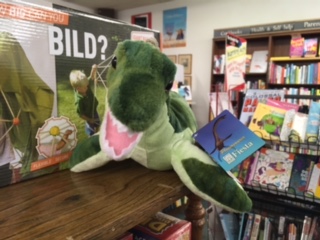 Hank: Hey, wake up and smell the coffee. Every plush animal in the store except Todd the plesiosaur reskwuffed my skwuff.

Todd: I have your back, Kenny.

Kenny: Well, I appreciate that Todd but as for you, Hank, all I can say is that you are never going to be allowed to help with receiving again!

Hmmn. So were the DK folks right about the need for Lego Batman security? Obviously.