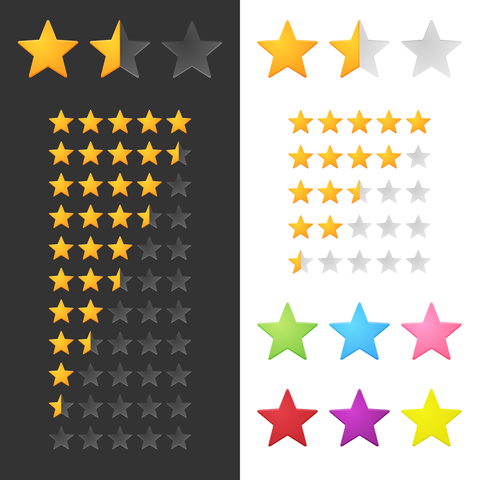 Our astute staffer, Sandy, often makes casual remarks at work that lead to blog posts. (Lucky for me!) Recently, she’s implemented a new system for organizing Advance Reading Copies (ARCs) in our office bookcase: instead of simply arranging them by publication date, Sandy looks up reviews and arranges them in stacks by starred reviews received. One star, two stars, three stars, on the top shelf, followed by the books that have yet to receive stars.

There are some flaws in the system: books continue to earn stars over the course of weeks and months, of course, so no stack of ARCs is guaranteed to be accurate past the moment of shelving. And there’s very little time in the bookselling day to revisit ARC placement. Still, when the timing works out, it’s a very helpful way to make sure critically acclaimed books are seen and read by staff before publication.

Today, when we were receiving a batch of new ARCs, Sandy remarked, “I wish there were an app that would ding whenever a book got a starred review.” My world lit up.

As a buyer who is stocking a full general store, not just the children’s selection, I would be so grateful for an app that alerted me to new stars across genres. I can’t read every book, and I pay close attention to review sources I respect.

Some of you may remember that for several years, I used to compile the starred reviews for youth literature every year, an endeavor that took countless hours. Now the amazing librarian Jennifer Jazwinski keeps a spreadsheet of starred reviews each year, and it’s an invaluable resource. But how fabulous would it be to have an app that compiled those stars, was sortable in any number of ways, and linked to the reviews themselves?

An app that acted as a clearinghouse for Booklist, the Horn Book, Kirkus, Library Journal, Publishers Weekly, School Library Journal, etc., would be an incredible resource I’d pay for. An app could lead traffic and potentially new subscribers to those review magazines, and show partial reviews, respecting each review source’s paywall policies.

In addition to booksellers, librarians, publishing folks, and authors, I think there would be plenty of avid readers outside the field who would use (and be willing to pay a bit for) a starred review app. So many possibilities! There would be something magical and fun for readers in an app that could send little dings every time a book in their selected genres (or even selected authors) received a star. And the serendipity of it! An alert might catch one’s eye for a book one would never otherwise have discovered.

I know nothing about developing apps, and there are probably 84 reasons why this isn’t a feasible idea, but it seems like a straightforward process from the standpoint of content. Each review source would send its starred review lists to the app developer as they are published, along with links to the magazine’s review pages for those titles. Additional features could be added along the way as feedback and requests come in from users.

As a bookseller, I’d easily pay up to $25 a year for that app on top of my subscriptions, and I don’t think I’m alone. As Jo Regular Reader, I’d happily pay $5.99. There are probably many thousands of non-industry book lovers who would never think of subscribing to trade review magazines, but might pay for a starred review app (and then – who knows? – find themselves wanting a subscription to one of those magazines).

While I envision a single app that compiles the starred reviews, Sandy said she would even be willing for each review source to have a separate app. We agreed to disagree on that one, especially since the whole concept is imaginary.

Would any of you ShelfTalker readers be interested in a starred review app? And if so, what features would it include?

P.S. Many of my favorite children’s books haven’t received starred reviews; they may be ideal for and beloved by children, but not garner critical acclaim. So part of me regrets putting so much weight on starred reviews – but they are extremely helpful in guiding reading and even buying decisions, so I can’t pretend they don’t matter.

4 thoughts on “The Starred Review App”