Enthusiasm, thy name is Stacie Williams. My IPS rep is shown here with a book she handsold very adeptly at the Rep Pick session described below.

I’m not being strictly scientific here but given my 25 years of bookselling, and not having missed more than one or two New England regional trade shows over the years, I figure that I am reporting on my 23rd NEIBA Fall Conference. You may well ask if I find myself haunted by the ghosts of trade shows past while doing the things we attendees do, such as walking the exhibit floor, attending Rep Picks lunches, publisher dinners, and educational sessions. It’s a good question, and I promise to answer it later on. Talk about narrative suspense, eh!

First, though, we will start with Tuesday, which was packed with important stuff from 11:00 on, putting a good deal of pressure on those of us traveling to Providence from distant points. I wasn’t able to get on the road until 7:00 and had a four and a half hour drive, arriving too late for Zadie Smith’s keynote, which I heard was great. Thus my first order of business was the Publisher’s Pick-Nic Lunch. This is a speed dating format Rep Picks session. Each Rep gets 10 minutes per table, or five minutes if they travel in a pair as many did.

I had already seen and ordered the fall frontlists of all the major publishers so this was mainly a review for me and I decided therefore to do the obvious thing and report on the most colorful lines Reps used at the table. Here they are. 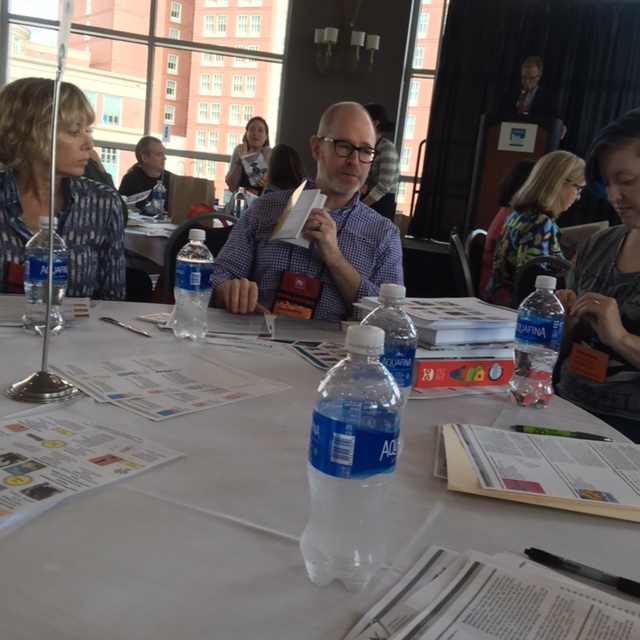 That’s David Goldberg (center) and some of Emily Cervone to his right.

Most diplomatic – Emily Cervone, Chronicle Books: (after surveying the table) “Wow! Everyone at this table is someone I totally love and if I don’t know you yet I’m sure I’ll love you.”

Most unexpected love affair – Bill Palizollo, Northeast Publishers Reps with Pancakes in Paris: (Bill just loved this book and hadn’t expected to): “He tells you everything about himself, he doesn’t leave anything out!” It shows how mature I’ve become in that I was able to resist asking Bill how we could know that.

Best use of new vocabulary word – Maureen Karb, Como Sales: “He’s so famous the hoi polloi like us don’t even know who he is.” (Speaking of John Derian)

Most flattering to me – David Goldberg, MIT Press: (speaking of the book Distracted Minds): “For example, how does Kenny write his beautiful PW blog posts and help customers at the same time? Multi-tasking is a myth.” Hmmn. Little did he know that I would be writing this in the quiet seclusion of my hotel room at the Omni. 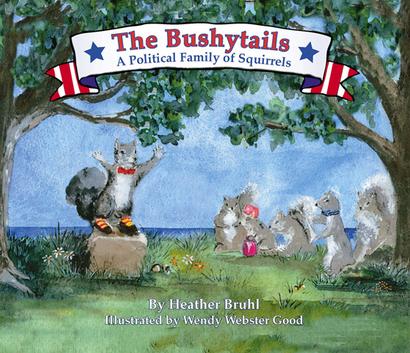 Always Learning Something New department – Steven Porter, IPNE: ” Heather is best known for The Bushytails, an account of the Bush family of Kennebunk as squirrels.”

Best clarification – Karen Corvello, Baker and Taylor: “It comes in a box shaped tube or a tube shaped box.”

Best disclosure – Suzette Cianco, W.W. Norton: “I’m not the biggest poetry person and I’ve never talked aloud to a poet before. I mean I’ve talked to living ones.” (Speaking of a collection of a dead poet.)

Best sales pitch – Stacie Williams, IPS: Stacie brings great enthusiasm to her sales pitches and totally sold me on The Hill, by Karen Bass, which she is pictured holding above.

After lunch it was time for educational sessions. I attended two good ones. The first was Selling More Non-Fiction, which had a terrific panel of David LePere, (Princeton, Yale and MIT Press), Steven Pace (Workman), Dale Sczeblowski (Porter Square Books), Debra Woodward (Red Wheel Weiser). It was moderated by my pal Vicky Titcomb of Titcomb’s Bookshop.

One problem I had was unfair competition from someone I thought was a friend, Judith Rosen, bookselling editor of Publishers Weekly, who chose this session to report on as well. I mean, just look at her taking those serious notes, How could I compete? 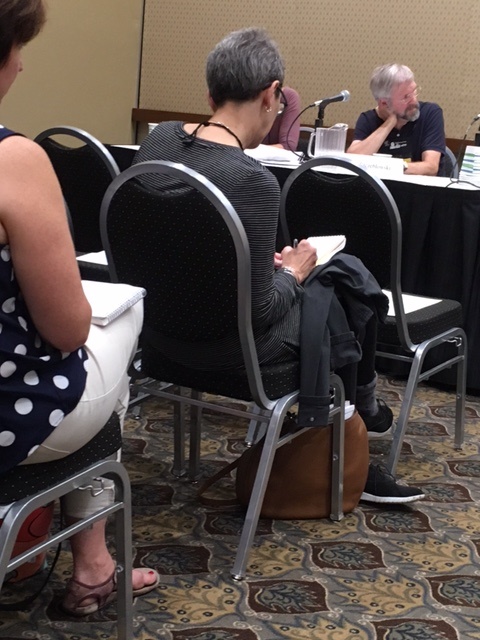 In any case I thought some strong points were made regarding the importance of making sure to stock and face-out perennially bestselling backlist titles like The Drunken Botanist, in that they confer credibility on their sections. Also there was a really good discussion as to the need for publishers to provide better linkage between fiction and thematically related non-fiction titles in their marketing, just as we do in our handselling. A passionate plea by ABA’s Joy Dallanegra-Sanger was also made for publishers to provide more non-fiction ARCs so that great non-fiction titles stood a better chance of being included in the Indie Next lists.

The next session I went to was What Reps See! It had a great panel led by Maureen Karb (Como Sales), and the panelists included Suzette Cianco (W.W. Norton), John Muse (Simon & Schuster), Nikki Mutch (Scholastic), and Stacie Williams (IPS).

Once again I was dogged by my erstwhile friend and PW colleague Judith Rosen. Look at Judith here, completely getting in my way of taking a photo of the panelists as she takes a photo of them herself. 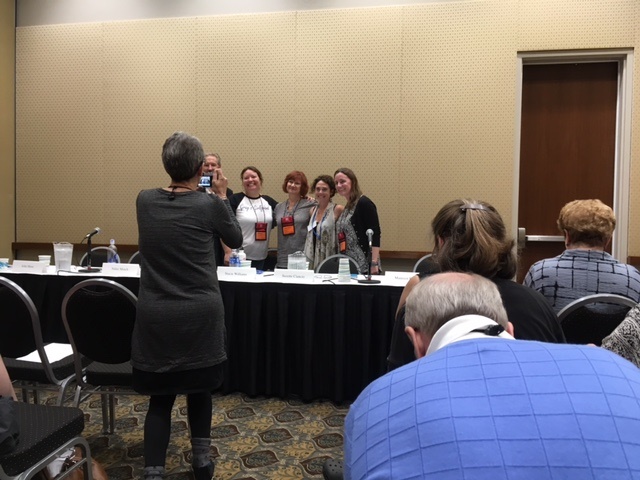 Things got off to what I initially thought was an incredibly auspicious start as Suzette said, “Shelftalkers are the most important thing.” Then  I realized that she didn’t mean Elizabeth’s, Josie’s, and my Shelftalker posts but actual, physical in-store shelftalkers, personalized by staff. Still, she’s right. They are a crucial element of in-store display and handselling.

Stacie informed us that she hadn’t brought a handout because she wanted to highlight something really crucial for us: active listening. That was both a clever move and very true. She went on to make some really, hem hem, pointed observations such as making sure booksellers do not point at where books are to customers but rather walk customers over to books, She also suggested not using the term “special order” as it conveys that doing so is an effort, but instead doing everything possible to make bringing in a book for a customer appear a matter of course.

Nikki  provided a daunting but very valuable list of best event practices and John provided and went over a list of good marketing tips and examples. All in all it was a very useful session.

That evening I went to an author dinner with some very gracious hosts from HarperCollins. I do feel that the value of a well-run dinner cannot be overstated as I have formed some great connections over the years to both books and authors that have lasted. This was a particularity enjoyable dinner as I had a chance to chat at length with two thoughtful and excellent authors pictured below. 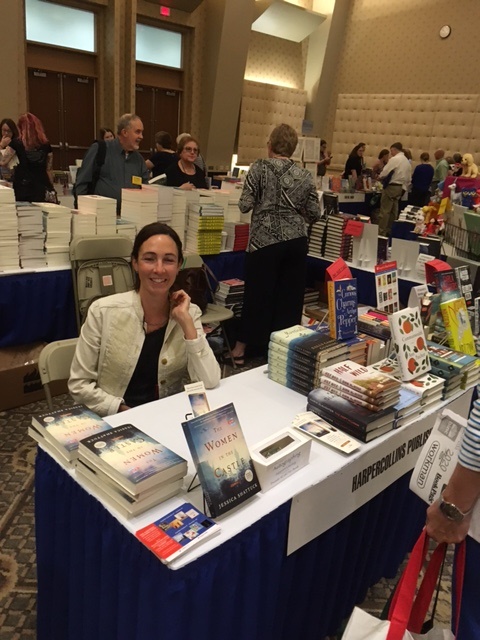 Jessica Shattuck, the delightful, author of ‘The Women in the Castle.’ Okay, I took this photo and the one below it at the trade show the next morning as I forgot to take photos at the dinner. What can I tell you. Jessica’s book is set during World War II in Germany and looks at issues involved int the accommodation of evil through the home life of three women during and immediately after the war. Her knowledge of the period and approach to the book were both impressive. 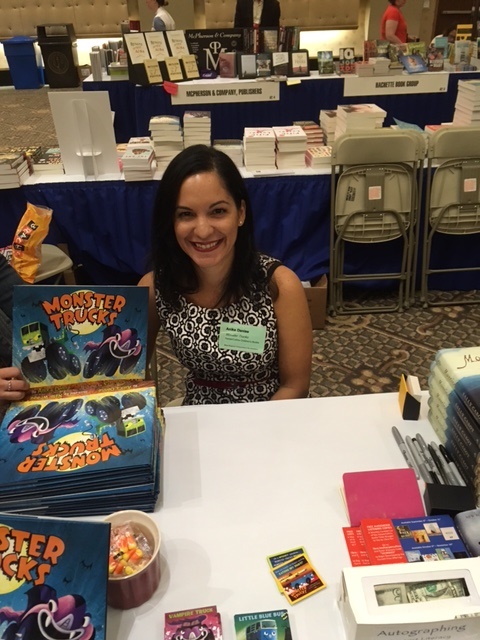 ‘Monster Trucks’ author Anika Denise. Anika, apart from being exceptionally nice, turned out to be friends with my Maine author pals Cynthia Lord and Lynn Plourde, and offered to follow in their footsteps by doing a DDG sponsored school event. Huzzah! 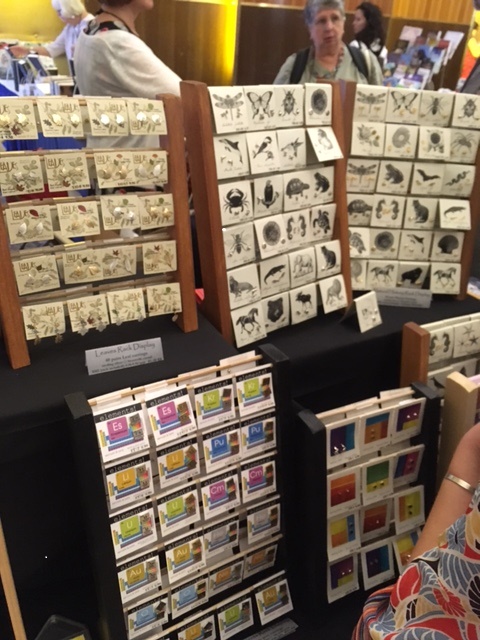 The next day, Wednesday, was the Trade Show Exhibit. I was, as I think many of us are are, haunted by the ghosts of trade shows past. The smallish exhibit hall conjured up echoes of images of the vast sea of booths from the 1997 Boston Exhibition Hall. Change, that is, both good and sad. There was a real sense of tight knitted community at today’s exhibition. I really enjoyed working the floor, mainly in terms of personal connections but also there were some good buying opportunities. For example, I had been looking to try out earrings as a sideline and there was a terrific line here from Semaki & Bird I was glad to find. I don’ t know if less is more when it comes to a trade show floor, but it is still vital and important.

And as for tomorrow? The Trade Show  comes full circle with more educational sessions, and a closing Keynote with Douglas Preston.I must say that the sandwich shape of this year’s program worked well in making hte exhibit experience better attended and more vital, and giving the education sessions a day off allowing everyone to refresh. A well planned show indeed,

3 thoughts on “Live from the NEIBA Fall Conference”