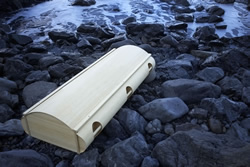 Let’s say you’re mortal. Now let’s say you’re a book lover. Where’s the intersection between these two things? You guessed it — bookcase coffins. Which (with apologies to you squeamish types) is the theme of today’s post.
In my travels around the web searching for apartment storage solutions, I stumbled upon (and — really — it felt like I’d actually stumbled when I came across these) two different bookcases that double as coffins. This way you can hide your coffin in plain sight if you want to own and take possession of a coffin before you die, which apparently an increasing number of people are choosing to do.
Let me pause for a brief confession here: when I first found these bookcase coffin images, I thought this was going to be a funny post — a “what an odd and offbeat idea, let’s all laugh about it” post. BUT then I read the content of the webpages on which these coffins appeared, and the topic suddenly became both a lot less humorous AND a lot more interesting.
The first two bookcase coffins below come from the website of a Maine group called Last Things: Alternatives at the End of Life. The group and website were created by  Klara Tammany, whose moving essay about her own mother’s burial illustrates the reasons her family and others are choosing to have green burials and rejecting what she sees as impersonal and ecologically damaging funeral and burial practices. Last Things offers support and resources for those looking for more information about alternative burial options. The coffins displayed on their site (including this one) are all handmade by group member/woodworker Chuck Lakin. The first one here is the Bookcase Coffin model. 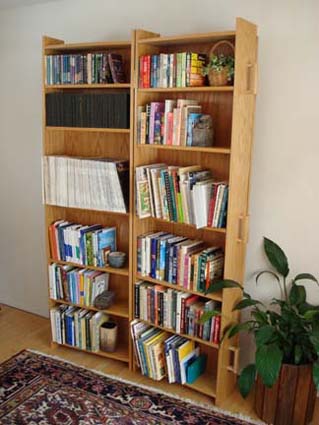 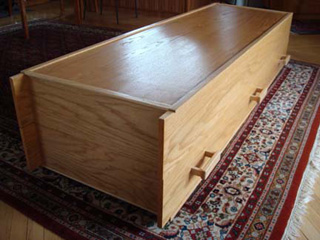 This second model is what Chuck calls a Multipurpose Coffin. It can be used either as a bookcase OR as an entertainment center, and I personally think it’s 100% convincing as either of those things. (I mean, really — who would know?) 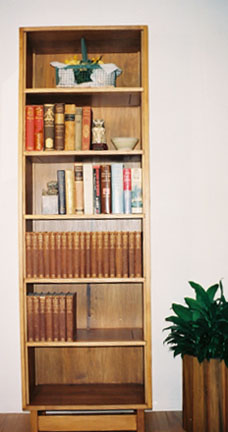 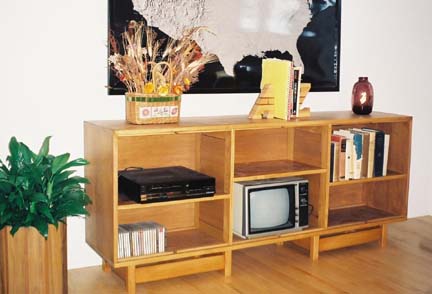 Like Chuck Lakin, New Zealand company Final Furniture Limited is creating coffins mindful of eco-conscious clients. Their nextgen bookshelf/wine rack allows you to raise a glass to your past while, well, facing your future. The photo on the beach at the top of this post shows how the bookcase/winerack looks in its… alternate form. (I feel like I’m writing about a Transformer here.) 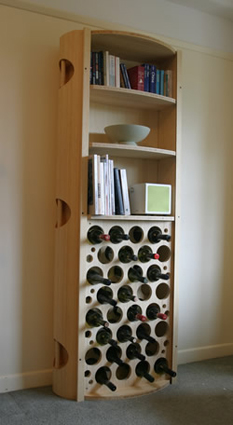 While the Last Things and Final Furniture bookcase coffins are probably intended more for people nearing the end of their lives, this next one (via Inhabit), which designer William Warren calls Shelves for Life, is not. As Warren explains, “Shelves For Life is a self-initiated project to further explore ideas of built-in sentimentality within our possessions. The aim is to make stronger emotional relationships with our belongings and encourage lifelong use… They are intended to be used throughout life as storage for personal belongings. On death, the shelves are dismantled and rebuilt as a coffin.” 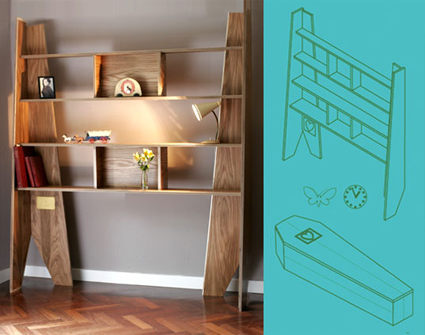 Maybe I’m being swayed by the fact that we’re about to spend some money on a “real” sofa which feels like an almost-lifelong commitment, but I like the rather anti-IKEA aim of Warren’s experiment with this. (Note, though, that someone has apparently come up with plans to make an IKEA bookcase coffin too.) Disposable is bad. You can store things in it now AND be buried in it later is, um… Good. Mostly. Especially when the design is as elegant as this.
That having been said (and this is the problem), I’m not sure how it would feel to be shelving books in and dusting knick-knacks on my future coffin. Suddenly that bookcase would feel a bit TOO important to me, I think. (God forbid the movers drop THAT one!) And I’m not sure I’d want such a large, visual reminder of my own mortality in my living room. Unless its presence would encourage me to procrastinate less and work more… Hmmm.
In looking around for more info on this topic I came across a thoughtful post on a blog called Pink Slip by one Maureen Rogers, that concludes thusly: “I have just gauged that our old Workbench bookcases are neither deep enough nor sturdy enough to act as coffins. If, when the time comes when Jim and I experience the miracle of death, we’re planning on anything other than cremation and scatter, I would consider one of [Chuck Lakin’s] creations. I’d probably go for the coffee table version. We can always use more storage.”
And, Maureen, you’d always have it too.