Yesterday we were very fortunate to host Jarrett Krosoczka for two school presentations and a store visit. Jarrett is best known for the wildly popular Lunch Lady series, but he is touring to support his new picture book, It’s Tough to Lose Your Balloon. School visits are always a lot of fun, and for this 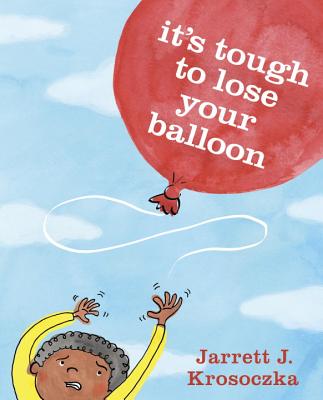 trip, we went to the JFK Elementary School in Winooski, Vt., which is a school delightfully filled with the bright colors and languages of many New Americans who have settled in Vermont. One of the great benefits of owning a bookstore is being able to bring authors and illustrators to kids. I have seen it time and time again where one or two children start thinking differently after a visit in a way they’ll never forget. It’s as if the world opens up in a way they’d never considered. Someone, a grown-up, is validating their burgeoning passion for art and making up stories. The kids all had grocery bags on their heads in honor of 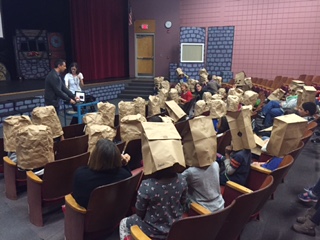 Jarrett’s book Baghead. I had gotten word that Jarrett would be about 10 minutes late and told the librarian, but none of the kids took their bags off. I think they really enjoyed being under cover. Jarrett was a real pro and hit the ground running after laughing at the sight of 70 children with decorated bags on their heads. His presentation was lively and the kids all loved guessing how many times he was rejected by publishers. I think it’s so important for kids (and adults) to know that a bestselling writer-illustrator spent a long time working at their craft without getting noticed by publishers. It reminds us that persistence and dedication can pay off. And, it was great fun to watch the kids try and guess the number of positive responses he got.

One of my favorite parts of a school visit is question and answer time. You never know what little ones will say. These kids ranged from K-2 and there was a range of questions. One of the best ones was, “What’s special about books?” Jarrett answered without missing a beat, “Books can take you wherever you want to go.” There was a hush in the room after that. My favorite moment of the Q&A was when Jarrett called on a little boy, and he said, “Yes, you, in the orange shirt.” The boy looked down towards his navel as if to confirm that he was the one in the orange shirt.

Jarrett also taught the kids about perspective and drawing. So 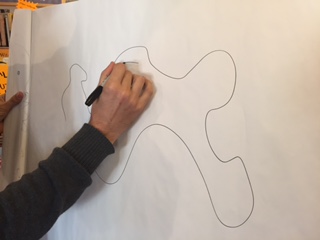 these little ones learned about horizon lines which they completely understood. He drew a large pig and then behind him a small barn and a mountain. It was fascinating and I learned a lot, too.

The bookstore event was small, but powerful. Jarrett did more 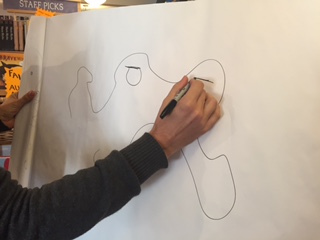 of a free-form discussion with the kids about art. Then he did the Squiggle Game, where a kid comes up to the easel and draws a squiggle and Jarrett then draws a picture. The kids absolutely loved this, as did I. To be able to draw something from a line and bring it to life as a full character is such a gift. But what I loved was when Jarrett drew a squiggle and let Mark draw 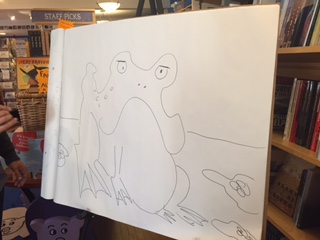 something. Mark’s eyes were focused in concentration as he let imagination run free. This was an amazing moment. In that instance that boy was treated like an artist, perhaps for the first time, and he drew with growing pride and confidence. What started as a game turned into a moment that he’ll always remember.

And that, is the definition of a great event.