On April 18th the independent film Tumbledown, starring Jason Sudeikis and Rebecca Hall, will debut at the Tribeca Film Festival in New York City. The film is the first joint project by the 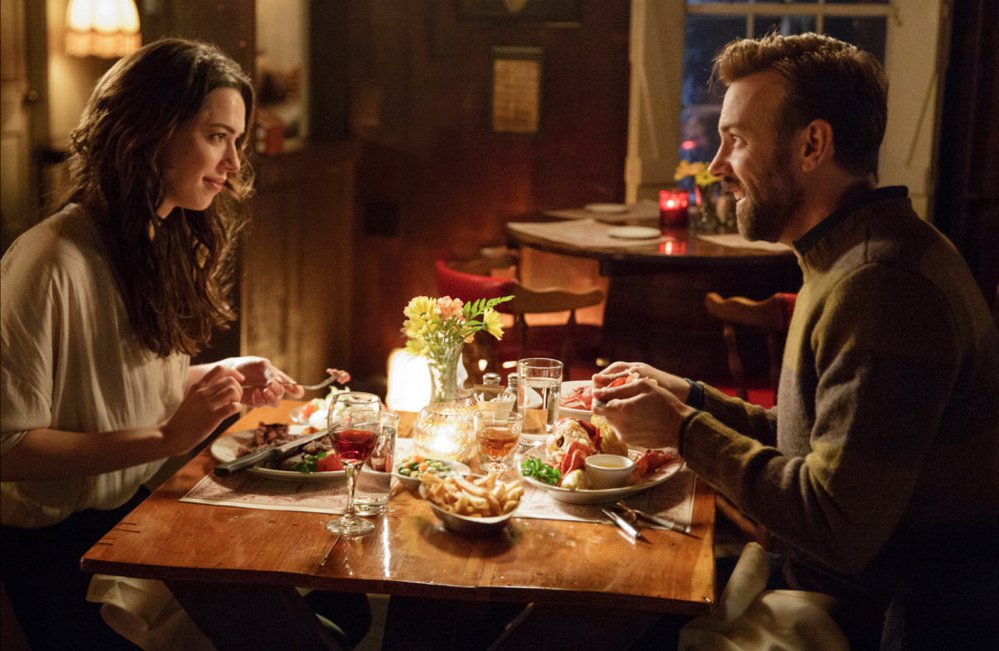 husband and wife team of scriptwriter Desi Van Til and director Sean Mewshaw. Tumbledown is set in Desi’s hometown of Farmington, Maine, and the film is in fact fraught with interest for my bookstore for a number of reasons.

Here are a few of them. Desi worked for me at DDG for three years when she was in high school (and is still a pal). DDG is literally a setting in the film (which was shot in Concord, Mass, where a doppelganger of DDG was constructed). The owner of DDG is a character in the movie, played by Griffin Dunne, and is Desi’s version of me.

Apart from talent, Desi and Sean have shown big character and perseverance in bringing this project to culmination and I am extremely proud of them. Obviously getting Desi’s thoughts on the independent-bookselling-related angles of the movie was an errand of moment. Kenny: I don’t have the exact date at hand, but it must be at least nine years since you first began this film project. If you could write yourself a letter that would arrive back on the day you first sat down to write the script what would it say?

Desi: I think there are two basic categories of advice that older selves give our younger versions, and it’s either ‘work harder’ or ‘work less hard.’ I would put your question in the ‘work less hard’ department. I would say to my younger self: Don’t get so attached. Don’t fall too in love with any given moment or line or scene. Over the process of making the leap from script to film, it will and must change significantly. Whole scenes won’t get shot because you’ll run out of time, or favorite lines will end up on the cutting room floor to help with pacing, or jokes that work all too well will get diced for the blushing ears of the MPAA. The lesson is: enjoy your favorite bits of dialogue or action in the moment as you write them, but recognize they are ephemeral. Once your draft leaves the theoretical space of screenplay and becomes the actual thing of film, it will have evolved into a different beast. Therefore don’t worry so much about getting all the details exactly right the first time; focus on the story and keep your expectations fluid. Kenny: Still, all things considered, I daresay that you feel at least somewhat like King Eric the Victorious of Sweden when ‘The King was like a man that hath borne over long time a difficult burden and, casting it down at length where he would have it, breatheth free and seeth all fair before him.’”

Desi: Maybe somewhat, at least when I am sitting on an Ikea chair. But perhaps I feel a little more like Sisyphus, except now we can finally stop rolling the boulder up the hill. Or, more likely, we can look for another boulder to roll. Or another hill up which to roll it. Hopefully whatever comes next won’t take seven years to make! Kenny: Now I know that Griffin Dunne, the actor who portrays your version of me, is a terrific actor with a rich background in the book world.  I do understand that he did a fabulous job. Still, I also note that my two suggestions for that role, Charles Laughton and Leslie Howard, were both disregarded by you. I suppose you made the right call but I can’t help wondering why not one of them?

Desi: Naturally we approached Charles Laughton per your request, but his agent informed us that he was unavailable on account of his death in 1962, and there was nothing we could say to convince him otherwise. We did consider having Griffin yell “Sanctuary! Sanctuary” in the middle of the second bookstore scene, but somehow it seemed just a touch over-dramatic. As for Leslie Howard, the casting of a Henry Higgins character seemed, frankly, a little on the nose. Luckily, Griffin does a tremendous job channeling the inner Brechner.

Kenny: Apart from capturing your own memories of youthly bookselling at DDG, did you use the presence of an independent bookstore in Tumbledown to express your more contemporary thinking about the role of community based-bookselling?
Desi: All cheekiness aside, the entire art department of Tumbledown worked its tail off to re-create DDG, not merely in its look and style, but in its warmth, its coziness, its density of amazing books and interesting things per square foot. The film tries to celebrate DDG’s creative energy, its thoughtful playfulness, its commitment to the community it serves as a nexus of intellectual and cultural life. In the movie, as in real life, DDG is a pulsing, vital, brilliantly curated place! Desi: I was afraid you’d ask me that. I am bad with favorites. But I’ll tell you two novels I’ve adored in the past year: the rapturous Euphoria by Lily King, and David Gilbert’s very funny &Sons. As for read-aloud books, I’d be lying not to mention Abby Hanlon’s Dory Fantasmagory (which I just bought at your store, and which my six-year-old daughter Arden already loves) and any of Karl Ove Knausgaard’s My Struggle books, which if read aloud, might feel like someone were narrating the entirety of their lives in real time. But if you were to ask me which book I would most want Bill Roorbach to read aloud to me, it would be a hard choice between Life Among Giants or Remedy for Love.

Desi: Thanks for having me here, Kenny! I still remember fondly the time a customer came in looking for a book on the rules of writing, and you hand-sold him A Voyage Out by Virginia Woolf. And now it’s commemorated in the film.