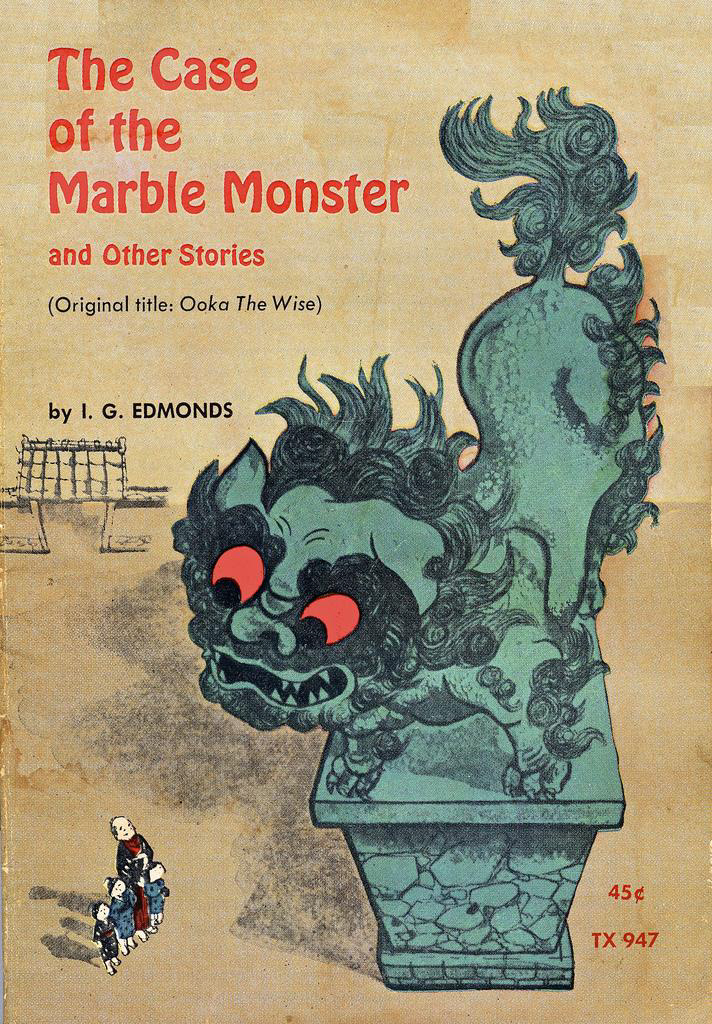 Of all the wonderful books I wish back in print, The Case of the Marble Monster by I.G. Edmonds is one of my very top picks. About the length of a Magic Tree House book, and aimed at about the same age (7-9, though older readers would also like it), this book contained 17 marvelous stories of the wise, kind, yet sly and often mischievous Judge Ooka and his many inventive solutions to perplexing problems, both large and small.

In the introduction, the author shares that he or she heard these stories from his or her own grandfather, Ojisan, on long winter nights in Japan. The author says that Judge “Ooka really lived, and he did some very strange things. He accused a statue of stealing some silk. He declared a student guilty of stealing a smell. He ruled that a man could be a thief and still be honest. He divided thirteen horses in two equal groups without cutting the thirteenth horse in two. And once he even sentenced himself to death! But all of the strange things he did were for the purpose of finding out the truth, so that he could carry out the shogun’s order to punish wickedness and reward virtue.”

Don’t you want to read the stories now, too? It’s like Encyclopedia Brown (without the ambergris). And yet both more delicate and more worldly.

I think what I loved so much about these stories when I was a child were not only the clever puzzles/paradoxes in the tales and their witty recounting, but also their gentle exploration of human character—with integrity, compassion, respect for others, and humor winning the day over greed, stubbornness, bullying displays of power, and other unsavory aspects of human nature. There’s a whole world of humanity, of heroes and villains, in this little book, from rich merchants to poor students, from small children to crafty con artists. There were kid problems and grown-up problems, all in the same book! It felt like a real world.

There’s something lovely about the fact that both author and illustrator hail from the Japanese culture, and that the author heard these stories from his or her nearly-90-year-old grandfather. I think that’s one of the reasons the book has such flavor and depth of texture even in its simplicity.

The illustrations throughout, by Sanae Yanazaki, are fantastic. I remember being fascinated not only by the various characters and their exotic (to me) silk robes and porcelain dogs and other accoutrements of life in long-ago Japan, but also by their similarity to myself and the people I grew up with in Scottsdale, Arizona, a place about as far from Ooka’s homeland as could be. This wasn’t a book that felt distant or alien; it was full of familiar notes and emotions, little kids who loved their puppies, fun and peppery grandparents, lively family gatherings, celebrations and festivals to look forward to. There was mystery and suspense and the huge satisfaction — 17 times! — of learning just how Judge Ooka would outwit the rogues and scoundrels who tried to lie, cheat, and steal.

I’ve re-read The Case of the Marble Monster several times over the years and find that it holds up beautifully. Simply told, with a rare quality of clarity, lightness, and charm, these stories are timeless. I don’t know if I.G. Edmonds ever wrote anything else, but he or she is a master storyteller, like Natalie Babbitt or Richard Peck — fluid, graceful, authoritative in the most invisible way.

My copy is from Scholastic Book Services which published it via an arrangement with Bobbs Merrill — which sounds as though it was one of my weekly book order treasures from the second or third grade. Regardless of who owns the rights at the moment, I just need to tell you publishers that this is the kind of book that kids eat up and adults find delightful. It invites all kinds of critical-thinking skills, too, in case someone (*coff*hello, Scholastic*coff*) wanted to reissue it with a school market in mind. If so, I hope they wouldn’t monkey with the text or art; it’s quite perfect as is.

So — my publishing pals, here it is, right in your laps: a perfect chapter book for that hungry young reader crowd. Aren’t you always telling me you want to find more of these? Today’s children need Judge Ooka! And so, come to think of it, do adults.