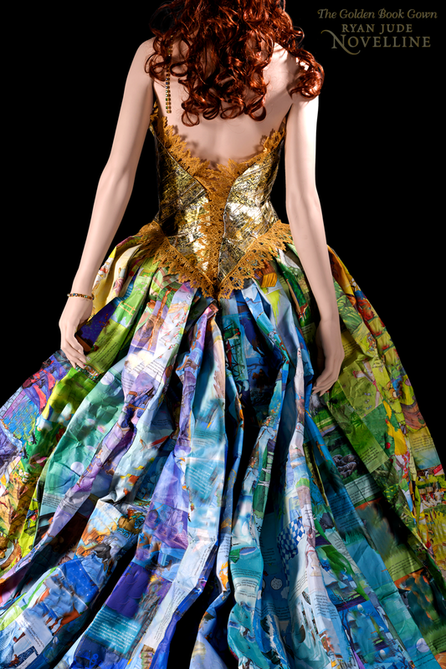 You may have read about the extraordinary Golden Books gown created by the gifted young designer, Ryan Jude Novelline (how do you like that last name for a man who creates beauty from books?). Novelline was only 20 years old in 2010, when he used illustrations from discarded Golden Books, stitched together with gold thread, to fashion the paper skirt. He made the bodice from the iconic golden spines of the books, and added puffed sleeve accents (shown in the photo below) filled with packing peanuts. Novelline is considered a “green” designer for his use of recycled and sustainable materials; this gown proves that green fashion can provide as rich a fantasia as can be imagined.

Two years ago, I contacted Ryan Jude Novelline to ask if I might blog about his glorious gown. We corresponded for a little while before I discovered that School Library Journal had already run an article about the gown, so I shelved it for a while.

Now, his gown is actually on display at Drift Contemporary Art Gallery in Portsmouth, N.H., as part of its Last Word exhibit through November 2, and I think ShelfTalker readers would LOVE to see it in person! I know I would.

Ryan graciously remembered our email correspondence and invited me to debut a new photograph of himself with the live model from the show opening. I unveil for your delight… 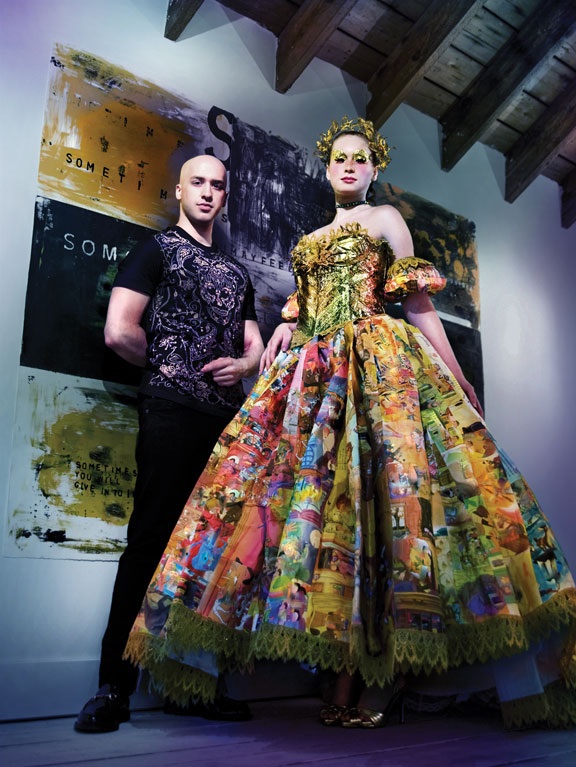 Below is my interview with Ryan from our first round of correspondence in 2011, updated with tidbits from our most recent round of emails. I am in awe of his imagination and talent, and thoroughly enjoyed his thoughtful responses to my questions. Please enjoy his words and, if you find yourself in New Hampshire, admire his gown up close!

Hi, Ryan. Can you tell ShelfTalker readers a little about yourself?

I am a fine artist and designer based out of Boston. I have worked as a Disney Imagineer and have also made pieces exclusively for GAP and Harvard University’s fashion show, Eleganza.

[Ed. note, an update: Novelline has also designed for Diane von Furstenberg. The Brazilian publishing house Editora Moderna is showcasing his work in Art Project – Vol. 5, a forthcoming book scheduled for release in 2014 designed to introduce children to the world of contemporary art.]

How did you come up with the idea for the Golden Book Gown?

My mother and I were sitting in her writing room talking about how children’s books have such unfortunately short life spans. Books read at such a young age leave such long-lasting impressions on a person’s character, yet the physical books themselves barely last beyond one or two generations of use. The Golden Books series in particular was one that was passed down to me from my mother that heavily influenced my artistic identity. As a small child, I would tuck myself away and in silence passing hours attempting to perfectly replicate characters on printer paper to hang on my bedroom wall. Until I had conversation with my mother about the books, I had not reflected upon the many hours I spent admiring them as a child.

Can the emotional impact of these books endure beyond their initial use? This became my challenge. I was told I could never achieve such volume with paper, but in this case, I was stubborn and ignored arbitrary restrictions. Having said that, constructing the dress was a physically and emotionally exhaustive process unlike any other I have yet experienced as an artist. Creating the dress elapsed nine days around the clock from the newspaper mockup to the final piece.

The gold thread was a true challenge. It is regular cotton thread wrapped into a tiny metal-coil that caught itself in the machine every 10 inches or so and needed to be rethreaded about every 45 seconds. The whole ordeal was a massive undertaking that I never analyzed formally until much later. If I did not take the process photos myself, I would not believe I even created it. My body was so numb by the end, but the reactions immediately vindicated the effort. I am overwhelmed.

The skirt is made entirely out of the actual pages of the books, ~3000 that were sorted by color and ~2000 of the most vibrantly colored were sewed together using ~2200 yards of golden thread. There was no transfer process of the images onto fabric. The viewer is simultaneously seeing the inside of hundreds of actual Golden Books. When choosing which pages I wanted to include, I had to hold up the illustration and imagine it from 15 feet away at optimum viewing distance averaging at evaluating one page per second. Similar to how a painter must step away from his canvas to see the entire image he creates, I was imagining this illusion of distance as I worked. Each page was like a 5.5″ square tile in an epic paper mosaic. The covers themselves were not used in the dress beyond the foil spines that were pressed together against duct tape to form the bodice.

Has anyone ever worn it to an event and is it for sale?

A musician did contact me about borrowing it for an awards ceremony in New York City but ultimately could not wear it due to scheduling conflicts. While it is more a piece of sculpture, I designed it to be functional. The dress is not currently for sale. There is a plan in the works to display it, but the details are still top secret. Several people have tweeted me recommending that I donate it to the Metropolitan Museum where it could be properly stored and displayed long-term. I would love for it to be preserved for the enjoyment of future generations. It is currently in a storage facility outside of Boston away from the heat and sun where I do not need to worry about it. As of yet, the dress has no protective coating and the raw pages are exposed, so it would easily be ruined in the rain. When it comes back out of storage, I will spray a matte finish to assist preserving the colors. [Ed. note: at the time of this article, the gown is on display in New Hampshire at Drift Contemporary Art Gallery.]

The model in the photos, Emma Safir, is a printmaker friend of mine and was a great sport about wearing it. She had one fitting early on so I could properly adjust my form to her measurements, and I worked off that. Then she came once again for a muslin bodice fitting, and then once last time after the skirt was finished. “Wow! That was fast,” she said at the final fitting at the sight of the finished, strapless dress. It takes only a few minutes to put on, weighs about 15 pounds, and is held on entirely at the waist. I would hold the skirt up by the hip ties while she ran underneath and slid up through the opening. Then I would tie the back and stick on the bodice with velcro.

She wore the dress for about a half hour when we took the photos. We experimented with a lace crown that tied into a braid in her hair, but I chose not to develop it into a more finished piece. There are several unfinished Golden Books paper gloves lying on my studio floor that never made it to the runway. They may have been too gaudy. Although I feel like the fun of a piece like this one is it gaudiness, so maybe I will revisit them. This type of ongoing conversation with myself is always going on in regard to the work. It’s a living, breathing process.

Here is a link to the YouTube video, the only real footage I have of the dress.

The dress was also just showcased by Hewlett Packard in the promotional materials for the Frankfurt Book Fair happening this week. It has been fascinating to see how the piece has waltzed across different circles of interest and truly appealed to people of all ages. In the meantime, I am working on a new gown, a larger one, also inspired by classic literature. That is expected in spring 2014. I will keep you posted.

Thank you, Ryan! We look forward to that.