Some of you know that in addition to co-owning the Flying Pig Bookstore, I also am a stand-up comic. I perform alone and with a group of female comics called The Vermont Comedy Divas. We have a charitable component to our group called Divas Do Good, where we put on benefit shows for organizations with a social mission.There are five of us and we usually perform in Vermont, until this past weekend.

The Divas had a meeting in March and we really wanted to create a road trip. So, I thought let me 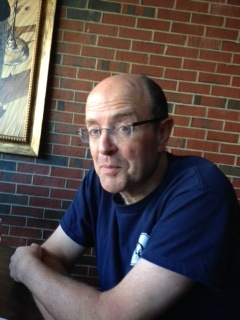 contact some booksellers I know and see if they can help. Kenny Brechner of DDG Books in Farmington, Maine, totally acted as our booking agent and brokered a deal with an organization called SAVES (Sexual Assault Victims Emergency Services) and we had a benefit show on Friday night. So, Thursday morning we left Vermont in a friend’s friend’s 27-foot RV and headed up to Montreal for the night and then swung over to Maine for the gig.

Without the the help of Kenny, I would not have slept in Walmart parking lot in Montreal in the RV with four of the funniest women I know laughing until two in the morning. It is the closeness of the bookselling world that enabled me to email Kenny and get his help in introducing me to a wonderful organization that allowed us to get out of Vermont and do some good.

And a really fun part was having a drink with Kenny and getting caught up on the Common Core curriculum.

One thought on “The Help of a Friend”