Forget Universal and Warner Bros, folks. Children’s book illustrators have studios just as full of whimsy, magic, and fantasy, along with the advantage of also being real and personal and beautiful. One of the BEA events arranged by the Association of Booksellers for Children and the Children’s Book Council was a three-studio tour for small groups of visitors. This was a magnificently fun, enriching opportunity, one of the highlights in a BEA full of highlights.

Everyone involved in the planning and execution of this event deserves major kudos. I cannot imagine trying to work out the logistics; the mapping alone must have taken days. Beyond figuring out which Manhattan and Brooklyn illustrators would participate, the organizers had to group them into threes, divvy up the visitors among them, and then plan routes and timing and set subway and walking directions for at least a dozen disparate groups of booksellers from out of town. I need four Advil just thinking about that level of detail.

My group visited the studios of Tad Hills, Betsy Lewin and Ted Lewin, and Katie Yamasaki. They were all such kind and welcoming hosts, and their studios were distinct and enchanting.

Tad Hills lives in a fetching brownstone in a great little Brooklyn neighborhood full of authors and artists. We were greeted at the door by Rocket, a cheery moppet of a dog (you can see his smile through the flying fur below): 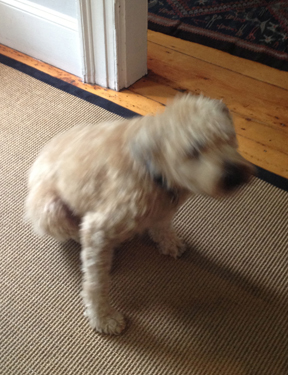 Rocket, one of the cutest dogs in existence.

Tad doesn’t have a separate studio; he paints at home at his dining room table and in the kitchen. The living room/dining room are open and light and full of colorful art, books, and incredible Halloween-costume building replicas Tad made for his kids. When we arrived, the dining room table also boasted a bowl of fresh cherries (yum) along with Tad’s new board book addition to the Rocket books, Rocket’s Mighty Words. This word book for early readers makes so much sense as a companion to Rocket Learns to Read. 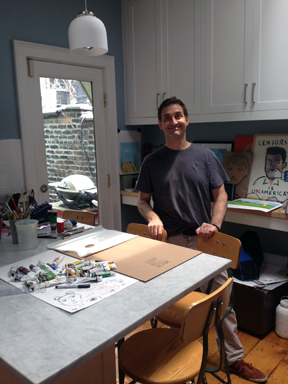 Tad Hills with his paints in the kitchen. 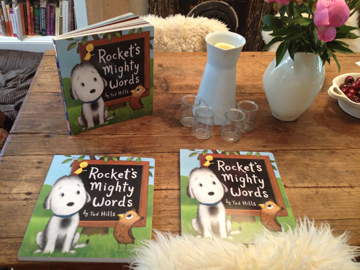 Tad’s new learn-to-read board book (coming in July). And cherries. 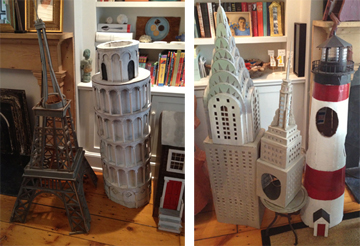 Halloween costumes Tad made (!!!) for his children. 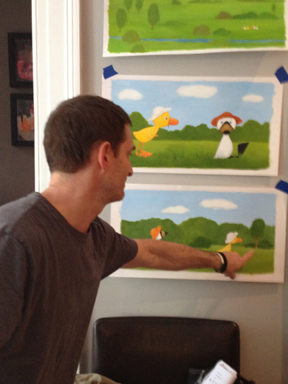 Tad showing us art from next summer’s new Duck and Goose beach book. 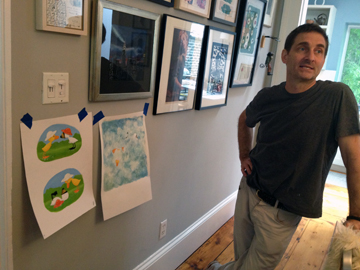 Look closely to see Duck and Goose tumbled by a big wave.

Tad’s artwork is shamelessly adorable. You just want to pick his characters up off the page and cuddle them. The best part of our visit was hearing Tad talk about his artistic process and his upcoming Duck and Goose book for next summer. The premise is funny and there’s a little surprising twist with the characters’ usual antics. Tad had taped up some of the art in progress and finished paintings on the wall for us to see, and took us through his process as both author and artist.

At the end of our visit, Tad handed out small square cards with a Rocket illustration, then escorted us to a nearby bakery, where the cards were good for two free cookies. How’s that for hospitality? (One Girl Cookies bakery is not only delicious, but is a favorite haunt of writers. We ran into Siobhan Vivian and Jenny Han, co-authors of Burn for Burn and this fall’s follow-up, Fire with Fire, hanging out side by side with their laptops.)

We hopped back on the subway to travel further into Brooklyn to visit Betsy Lewin and Ted Lewin’s elegant brownstone. As with Tad, their home houses their studios. All of the rooms we visited were full of art by both Lewins and other artists, and lovely objects from their travels around the world. This year marks the couple’s 50th wedding anniversary — amazing to believe because they seem too young to be at such a landmark! — and it was fascinating to see their separate studios. Ted has the lion’s share of space, but as he pointed out, his studio also stores both artists’ files. Their styles are so different, which they said in part accounts for their ability to stay happily married doing the same type of work all these years.

Ted’s paintings are detailed, beautiful, realistic, richly handsome. His travels have provided not only hundreds, likely thousands, of photographs Ted uses as references when he draws and paints, but also many stories and anecdotes. He told us of a farmer in a rice paddy who thought Ted was “nuts” for standing there all day taking pictures of him, but that day yielded a beautiful painting. 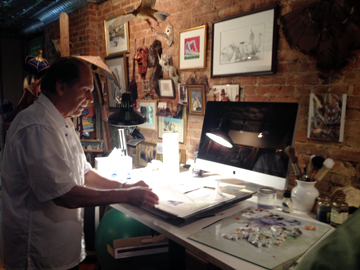 Ted Lewin showed us the table where he projects his watercolor art onto a large monitor so he can see all the details. 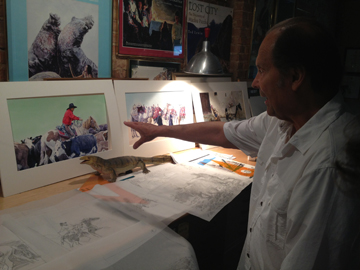 Another long table provides room for pages in progress. 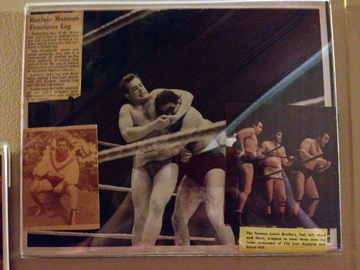 One of the many photos lining the stairways was of Ted’s days as a professional wrestler, along with his two brothers.

Betsy Lewin’s style is loose, free and joyous. Her sense of humor and joie de vivre burst from the page. No one does dancing animals like Betsy! 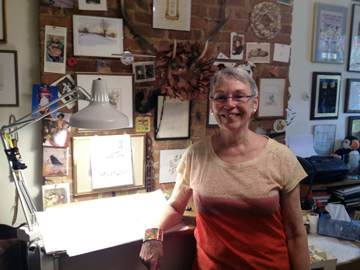 Betsy Lewin in her bright studio. 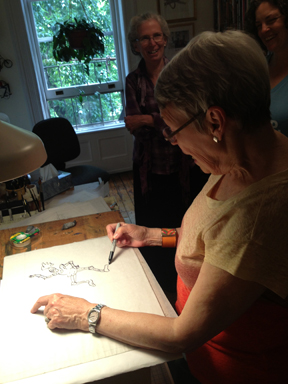 Betsy drew us a knight and horse from the book she’s currently working on. Magic!

Behind the couple in Betsy’s studio are just some of the dozens of books they’ve illustrated, both separately and together. 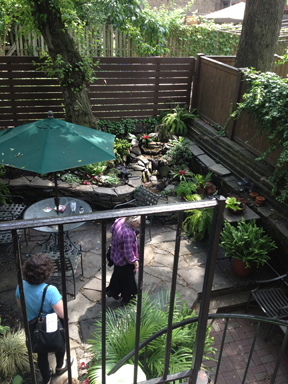 The Lewins’ garden oasis, where we were offered Champagne and chocolate.

I could have spent hours poring over the walls filled with artwork from both Lewins and photographs of their many journeys. But all too soon, it was time for us to depart. Holiday House had generously provided copies of Betsy’s You Can Do It! and Thumpy Feet for booksellers to take home, as well as Ted’s Look and Where Am I? What Am I?  Betsy had brought out a stash of tote bags she’s collected over the years for us to carry them in. Ted called us a cab to take us to our next studio. Really, we might have been in a Merchant Ivory film, our hosts were so gracious.

The cab dropped us off outside our last stop on the tour, a busy street with car repair shops and other industrial entities, including this mysterious business: 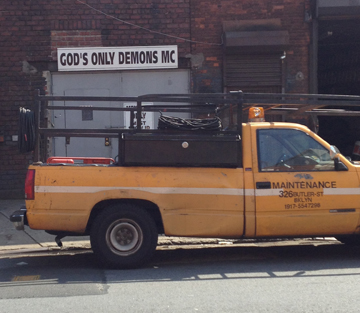 Artist Katie Yamasaki is one of many artists who have a studio in a warehouse building nearby, and she ushered us inside, up stairs, and down a long hallway. 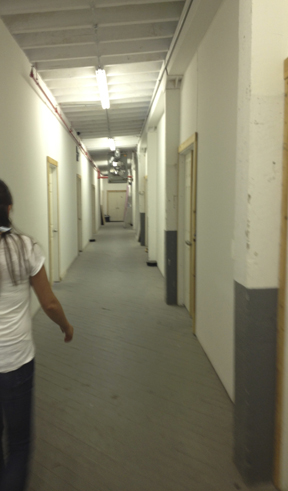 Each doorway is a different artist’s studio. Katie leads us to hers.

One of my bookselling compatriots took a deep whiff of the hallway and said happily, “It smells like art school.” There was indeed a paint-y, clay-ey aroma. 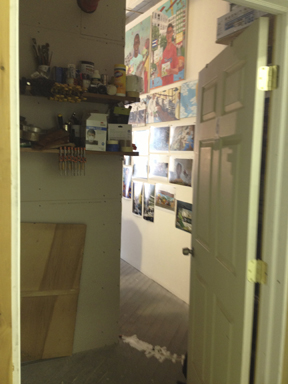 Katie’s studio was an orderly riot of color, filled with artwork covering the walls and some canvases lined up on the floor. Her artwork reflects and celebrates the wide, beautiful spectrum of cultural, racial, and ethnic diversity in our country and was a delight to behold. Katie told us that one of her grandfathers was from Japan; the other, French Canadian, so she is a multicultural cornucopia.

Katie not only illustrates children’s books, but paints commissioned murals all over the world. She is an elementary school teacher and also works with kids in urban neighborhoods on mural projects. 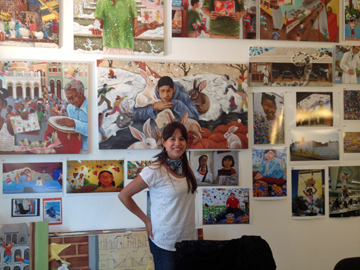 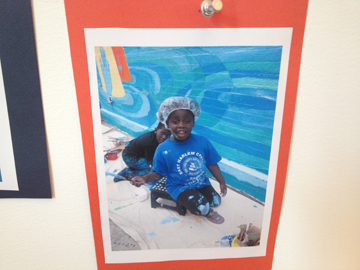 A couple of happy mural painters Katie worked with.

One of Katie’s most powerful projects involved two murals, one painted by children of incarcerated moms on the outside of the prison, the other painted by the moms inside: 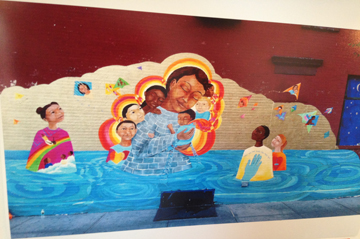 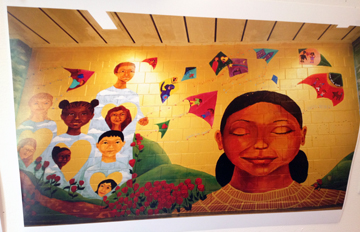 The canvases in her studio ranged from small to huge. I couldn’t stop looking at one piece in particular; something about its sweet round grace captivated me: 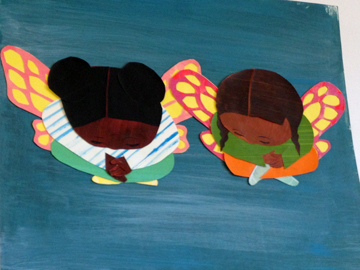 From a manuscript Katie’s working on.

Like the other artists on our tour, Katie had treats set up for us on her table, and goodies to take home, including Fish for Jimmy: Inspired by One Family’s Experience in a Japanese American Internment Camp. We left her studio happy, tired, and full of images from our day. BEA is such a busy whirlwind, full of sessions and booths to visit and things to tick off one’s to-do list. This was an experience that allowed us to slow down a bit, savor our profession, and appreciate anew the imaginative, inspiring people in it.

It was a rare treat to be invited to share a glimpse of these artists’ creative worlds. Thank you once again, Tad and Ted and Betsy and Katie (and publishers and ABC/CBC), for opening your doors to us. And can we get some more of those cookies?

5 thoughts on “Illustrators Give the Best Studio Tours”