I’ve come back to guest post on ShelfTalker because, like any bookseller, it is in my nature to want to share. When I find a great book I want to tell the world about it. And when I head off on an incredible book-related adventure? Well, I want to share that with you too! 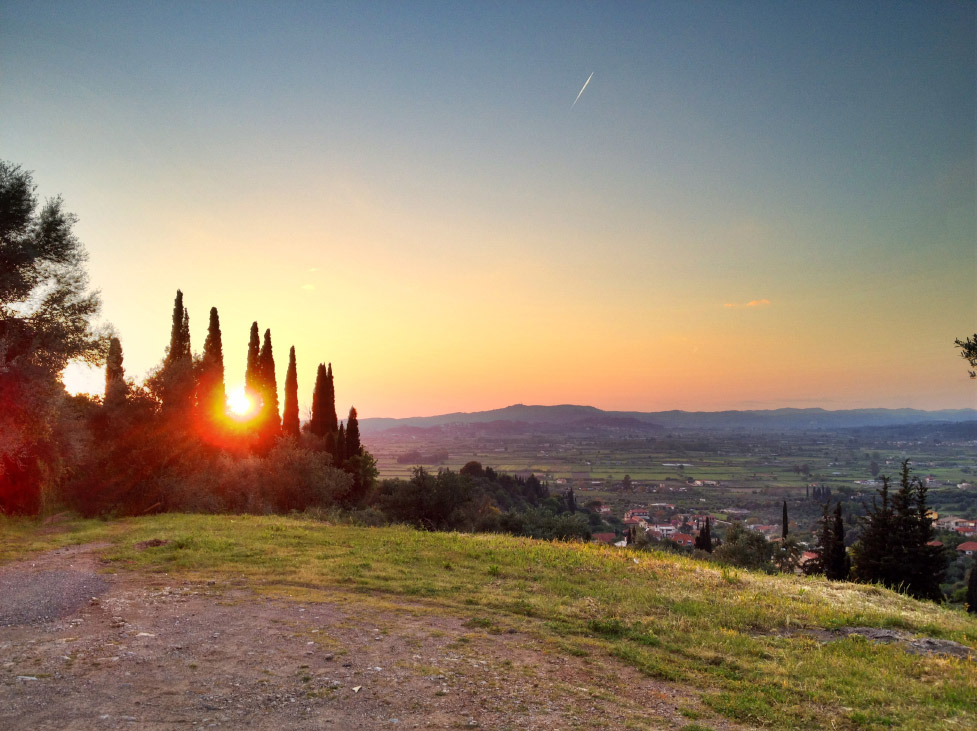 My husband Gareth Hinds and I recently returned from a trip that we both believe to have been one of the single best either of us has ever taken. Anywhere. We spent 11 glorious days in Greece, on a Greek Study Tour organized by The Examined Life: Greek Studies in the Schools, in partnership with Children’s Literature New England, as part of a rich course they offer called Greece Online. GreeceOnline is an online graduate humanities program that “includes a course of study featuring webinars, videotaped lectures, and a study tour of Greece.” It’s “open to educators, school and public librarians, museum specialists, authors, illustrators, publishers, and editors, and all those working with young people, as well as individuals committed to the program’s mission to strengthen Greek studies in the schools and to raise public consciousness and knowledge of ancient (and modern) Greece.” In other words — people like most of you.
Gareth had been asked to participate in the course and travel as the “artist in residence” on this year’s trip, which was the enticement that got both of us on Greek soil for the first time. We had hoped to go when Gareth was doing his adaptation of The Odyssey, but there simply wasn’t time. 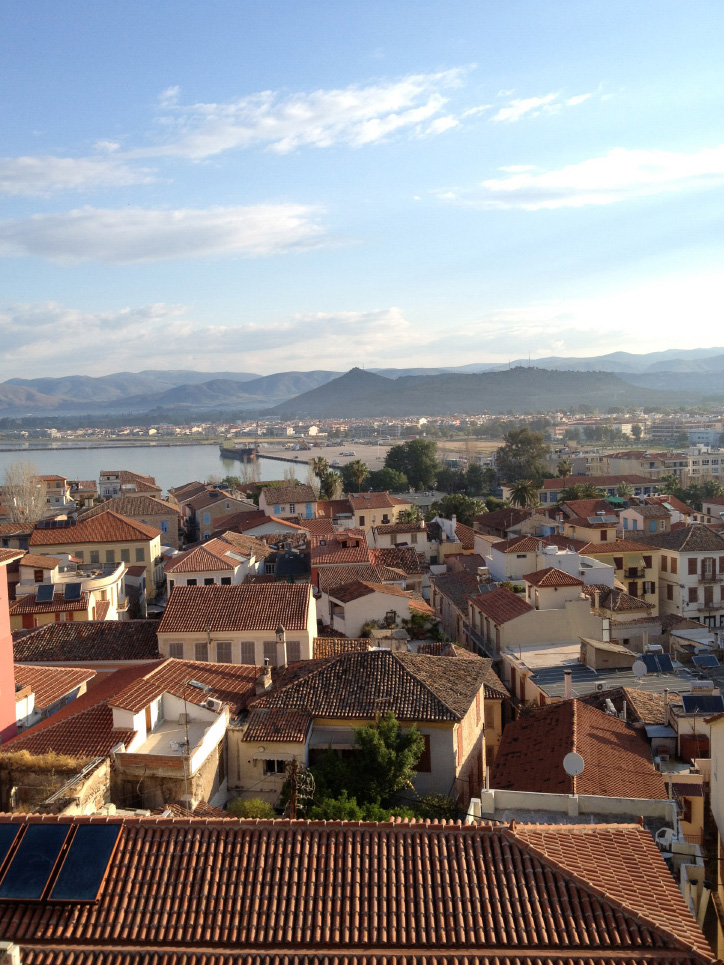 To be honest I’m glad we waited, because THIS TRIP — taken in the company of interesting, engaged, children’s-book-loving compatriots — was truly the way to go, which I should have known it would be. During my days at Wellesley Books I heard all about Greece Online from some of the teachers and librarians I worked with. They raved about the places they’d seen and things they’d learned, and told me that I too should take advantage of this opportunity. But had Gareth not been given such a generous invitation, I don’t know that I would have. And that means I’d have missed out on a remarkable exploration of history, mythology, culture, and beauty that I can barely begin to capture with my words, let alone my iPhone! Nevertheless, I’ll draw on both of those here and hope at least they give you a taste. 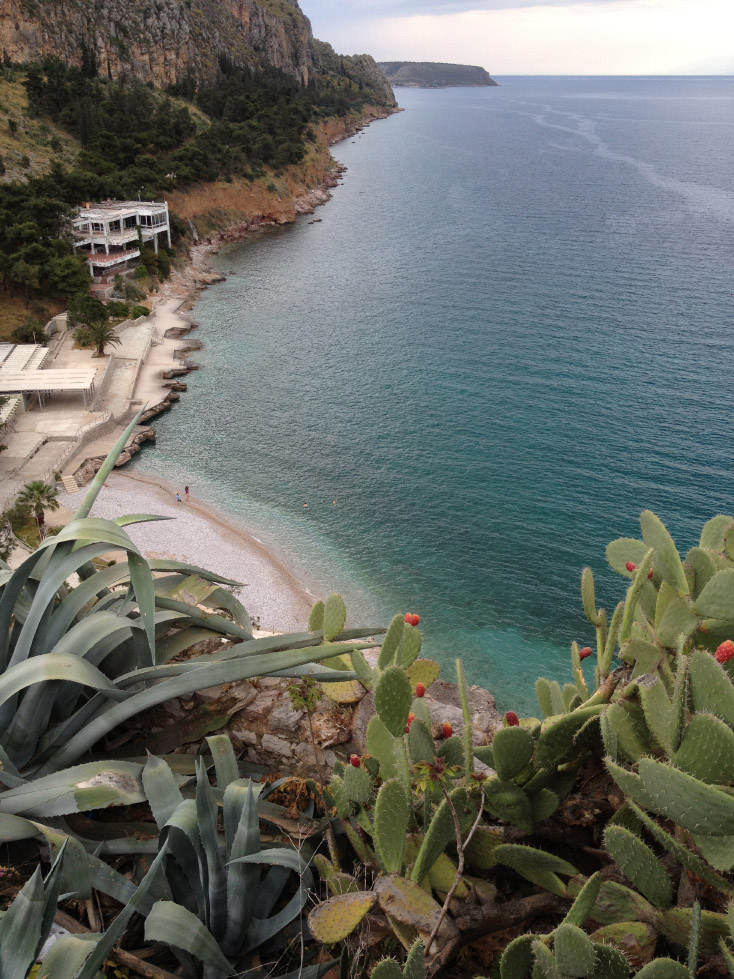 A beach in Nafplio.

The locations featured on the trip vary some from year to year, but from what I gathered while talking to veterans (yes, there are people who have taken the course and trip MANY times!), the general structure of the trip is the same. Each group sees remarkable antiquities and stunning landscapes, as they visit at least some of the sites that were highlighted in the course lectures and readings.
This year’s trip began in Athens, with visits to the home and studio of Greek author and illustrator Sofia Zarabouka and the National Archeological Museum, which includes countless treasures like this bronze sculpture from the Hellenistic period, and artifacts unearthed in countless dig sites or famous shipwrecks. 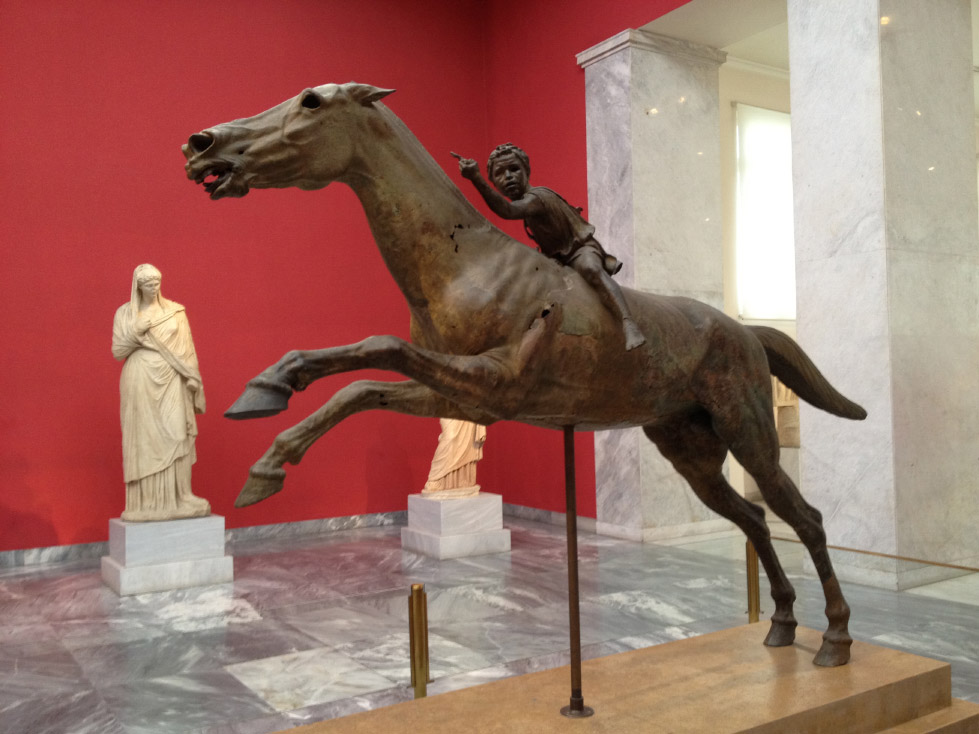 From there, our group traveled to Corinth, where we marveled at the steep banks of the Corinth Canal, then on to Nafplio, a beautiful seaside town in the Peloponnese, where we stayed overnight, ate amazing food, and visited (briefly) the Fortress of Palamidi, where the line between the present and the past felt very thin. It was easy to stand at this height and imagine the world at the time of its construction. Which is how I felt at several stops on our trip. 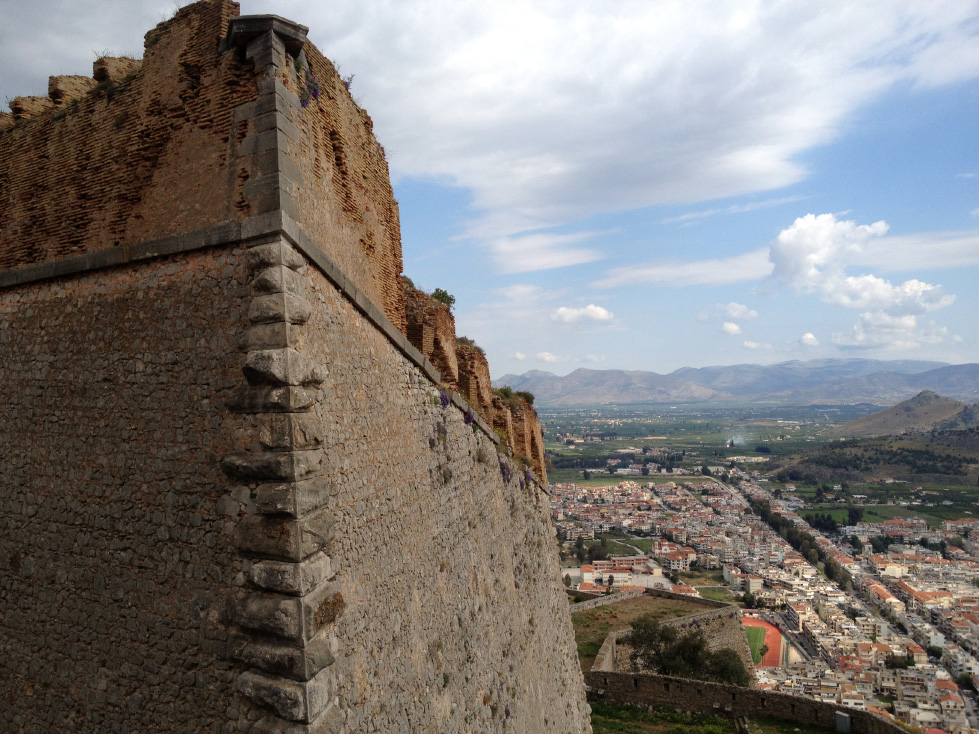 Here let me pause and say the person who should REALLY be writing his post is our UTTERLY remarkable, truly wonderful, wow-did-we-all-love-her Greek tour guide, Mara Kanari. Mara traveled with us on most of our trip, and her wonderful sense of humor and sage insights truly made history come to life for all of us. She’s a historian, a scholar, and an expert on the best places to get Greek dessert — in other words, she knows everything of importance. Were she writing this post, it would be a lot more interesting. And funnier! But also much longer, so… let’s keep moving. 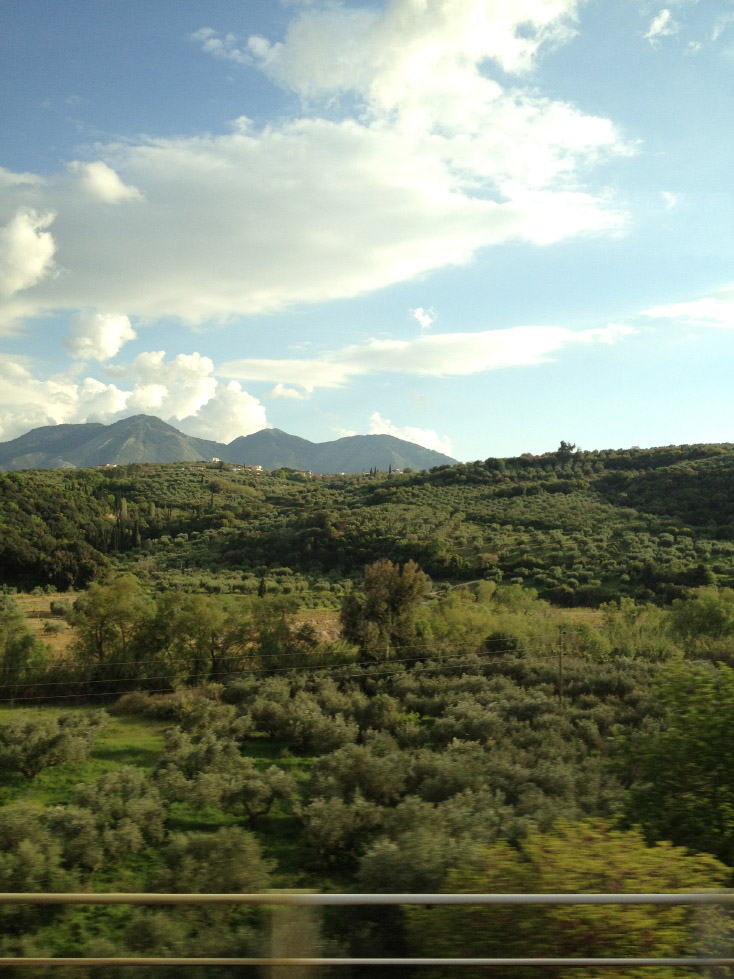 Even the views from the bus were breathtaking.

We visited the Sanctuary of Asklepios at Epidauros, where thousands of Ancient Greeks went to be healed and, while there, watched performances in a theater with unfathomably good acoustics. You could (and still can) stand in the center, speak in a normal voice, and be heard by people seated all the way at the back. (I know — I tried it.) The only other place I’ve been with acoustics that good was at our next stop on the tour, in the “beehive” tomb of Agamemnon. In the center of that space the faintest whisper sounded like a roar, from several feet away. 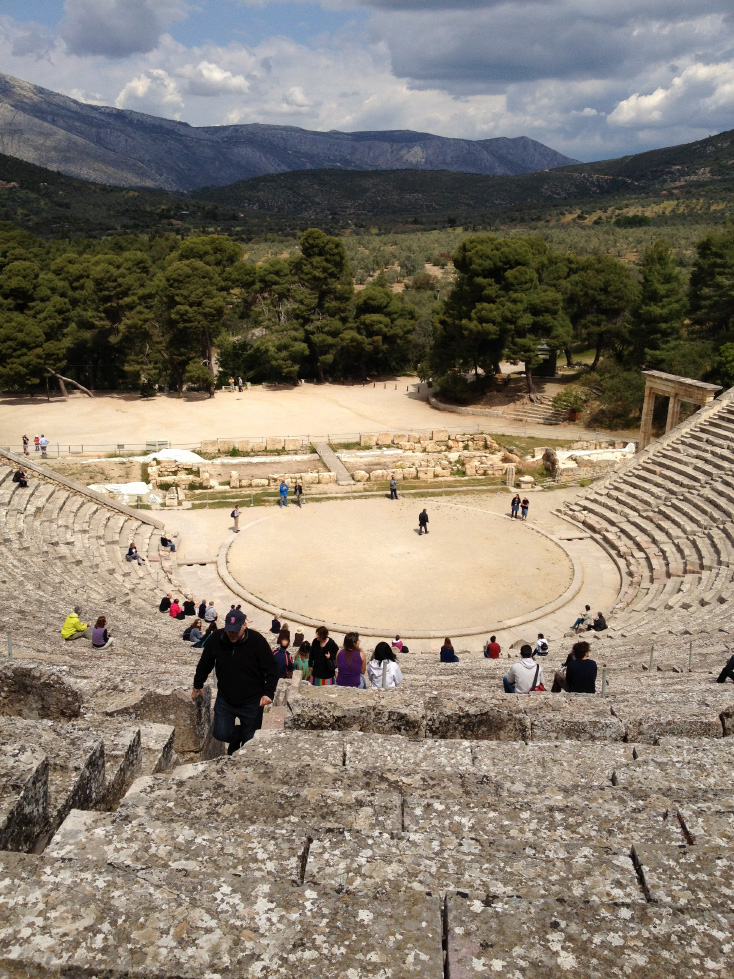 The theater at Epidaurus. 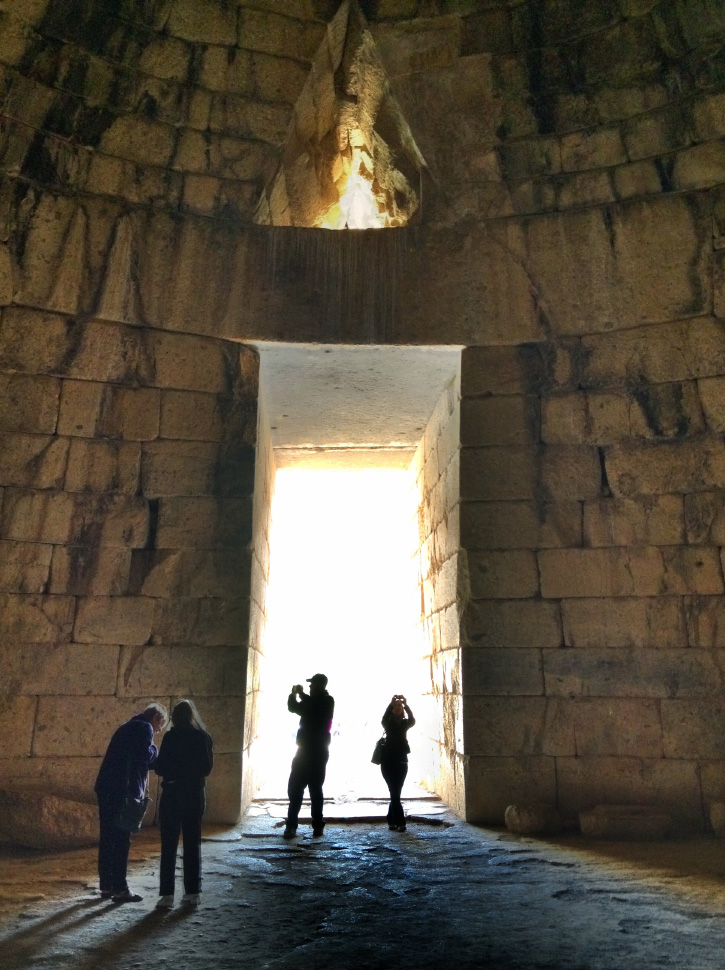 Inside the tomb of Agamemnon.

We visited Mycenae, the citadel supposedly built by cyclops, drove through an area of Greece known for its nine million (!!) olive trees, then traveled north to Arachova, a beautiful mountain town that’s popular with winter tourists, who come for the nearby ski resorts — and the scenery. 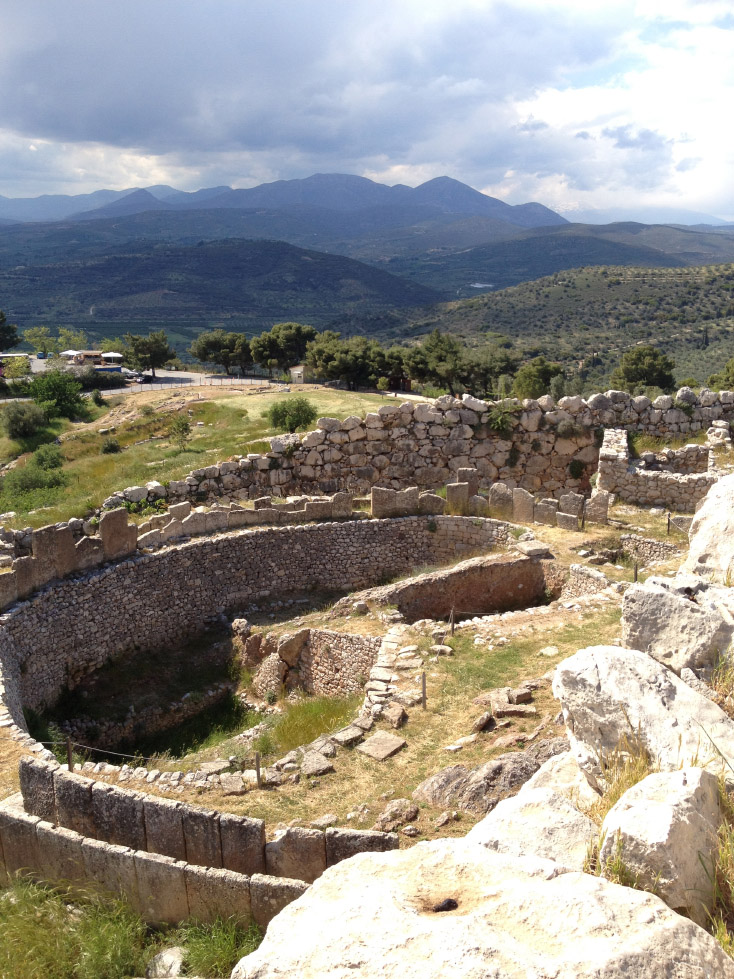 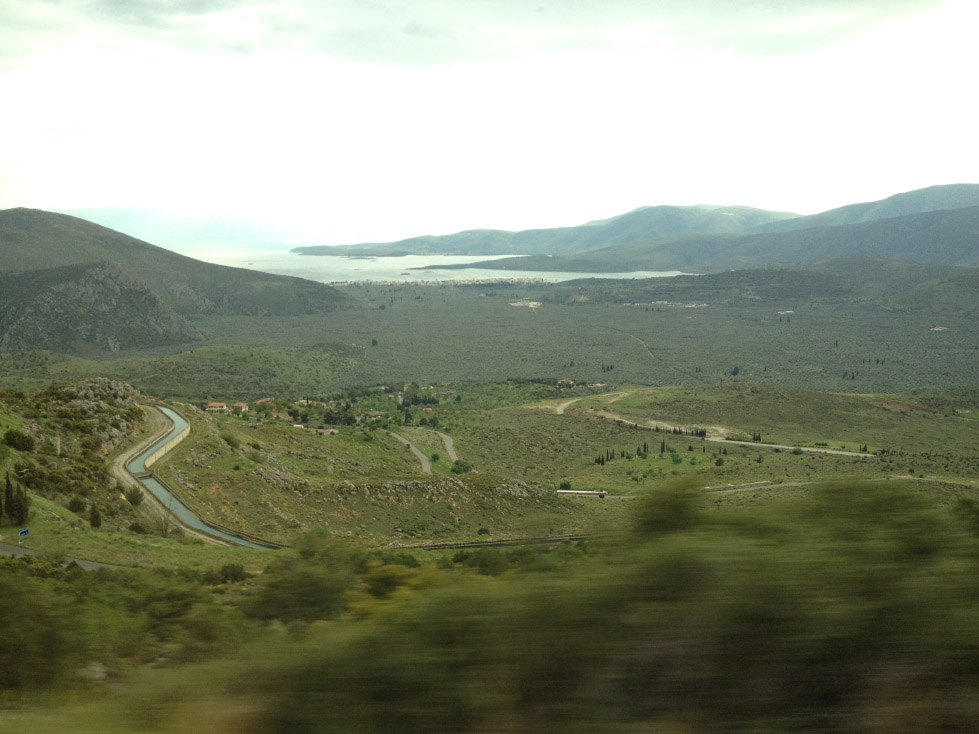 The small gray-green lumps visible in this shot from the bus are some of the 9 million olive trees that grow throughout the valley near the Itea Gulf. 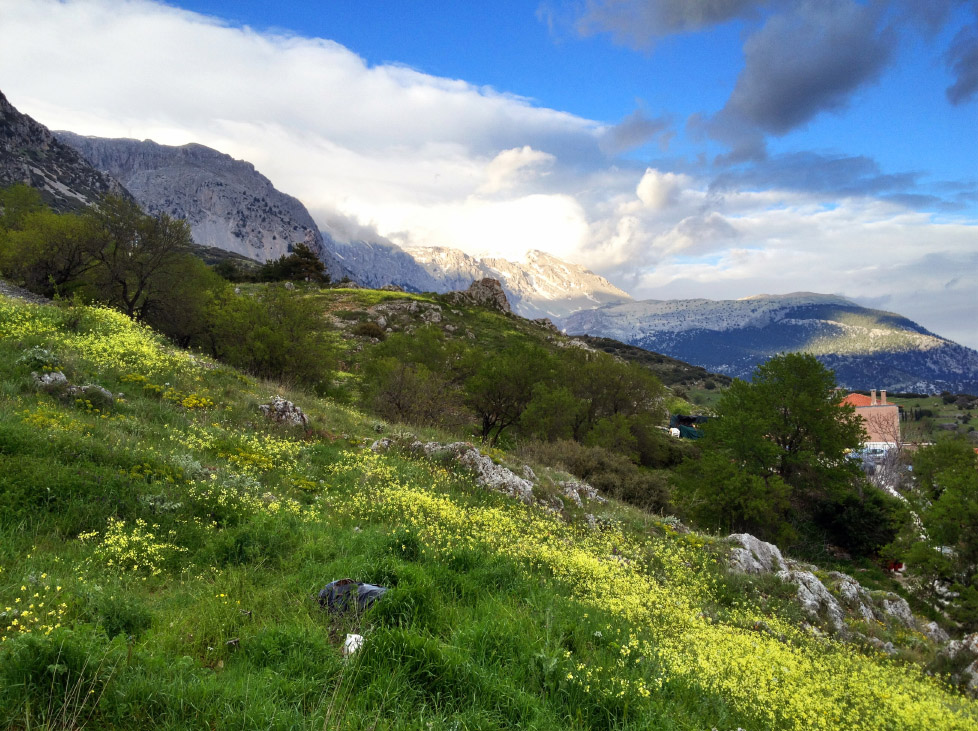 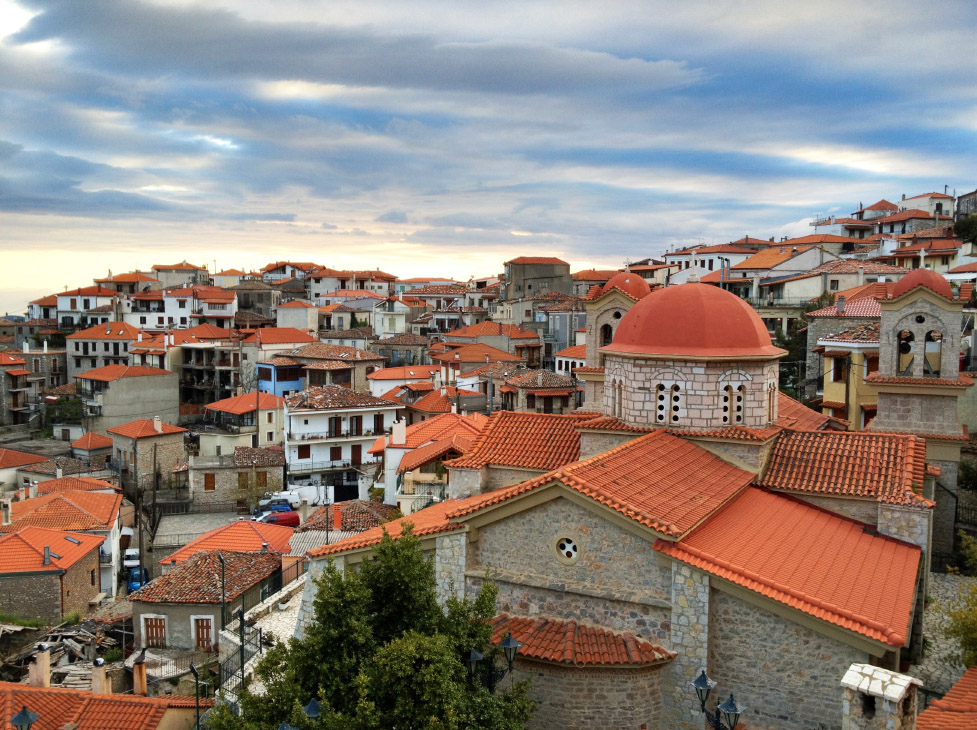 The rooftops of Arachova.

We visited Delphi, home of the Oracle, whose mountain views seem like they truly might hold the answers to all of your questions, then drove to Olympia, home of the ancient Olympic games, where we each walked the length of the original stadium (a dry river bed), thinking not just of the early athletes who’d set new records here, but of the athletes who’d been physically and emotionally scarred at this year’s Boston Marathon, the day before our arrival there. 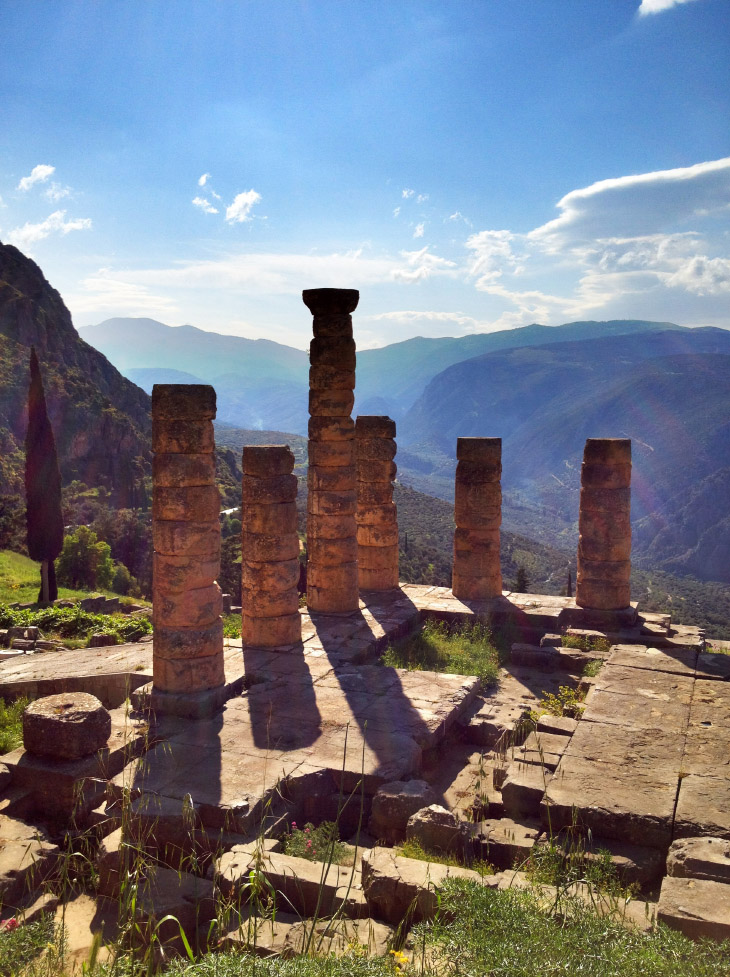 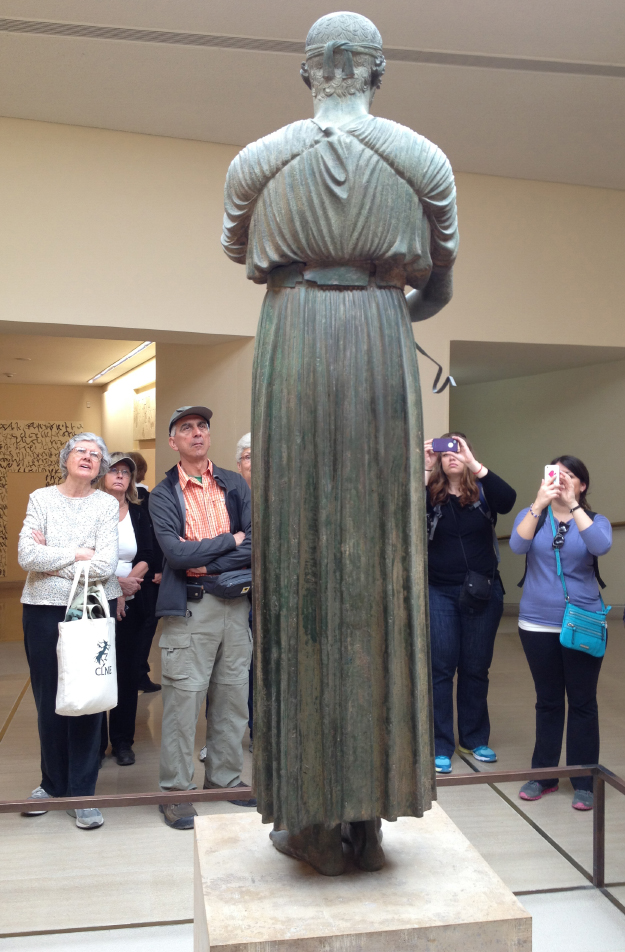 Beholding the bronze Charioteer of Delphi. 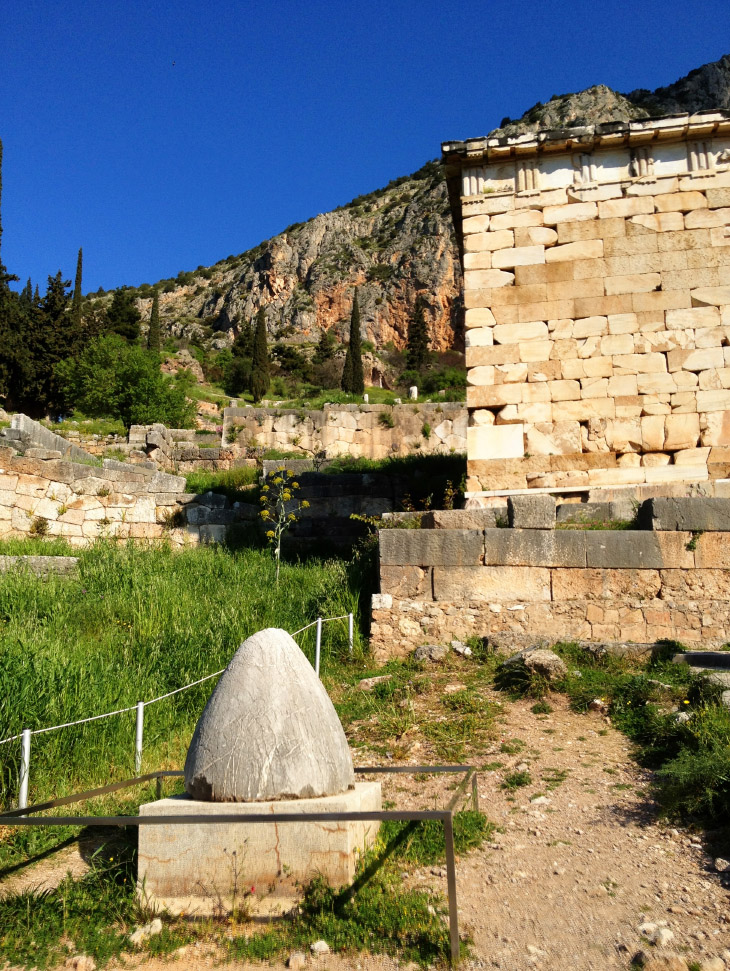 The Omphalos at Delphi, or the rock eaten by Cronos, who believed it was his infant son Zeus. 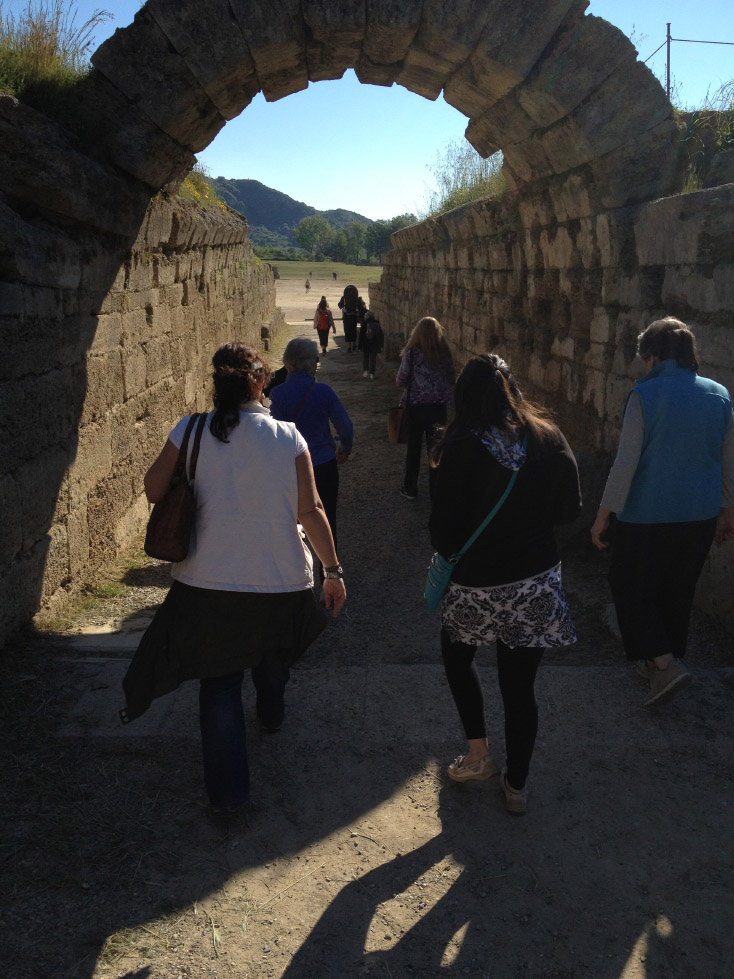 Entering the stadium at Olympia.

We visited the island of Hydra, where cats outnumber people and donkeys perform the work that would elsewhere be done by motorized vehicles (which aren’t allowed), then went back to Athens where we went to (where else?) the Acropolis and visited (what else?) the Parthenon. 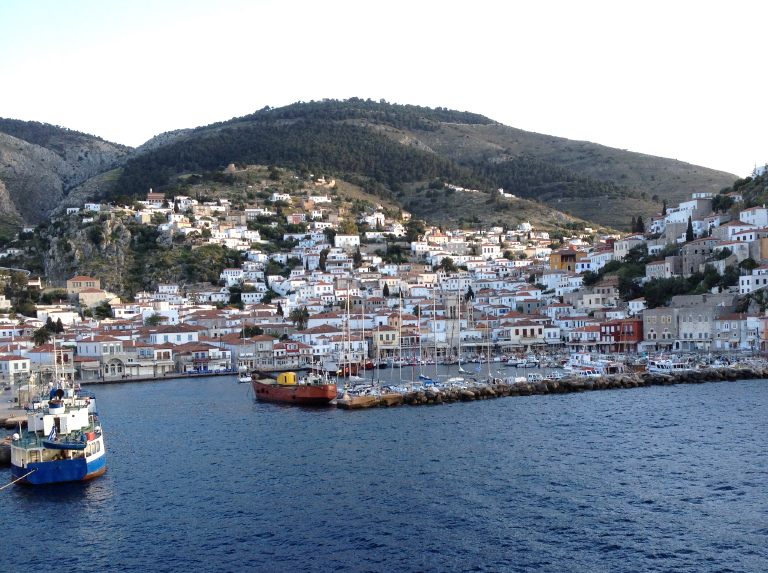 The port of Hydra. 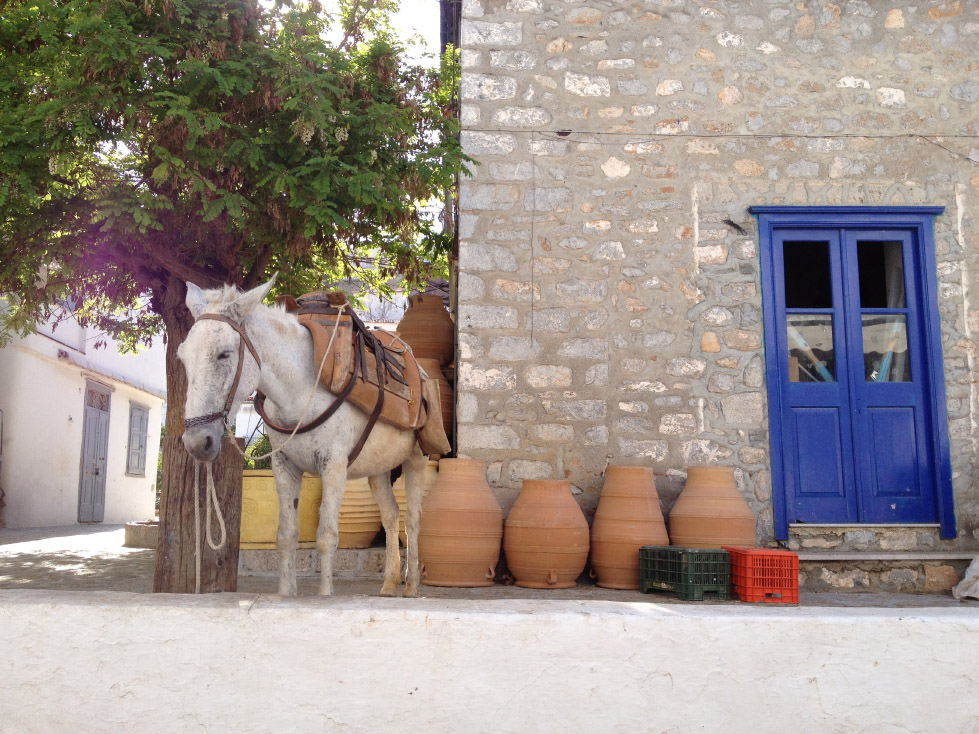 The mode of transport in Hydra. 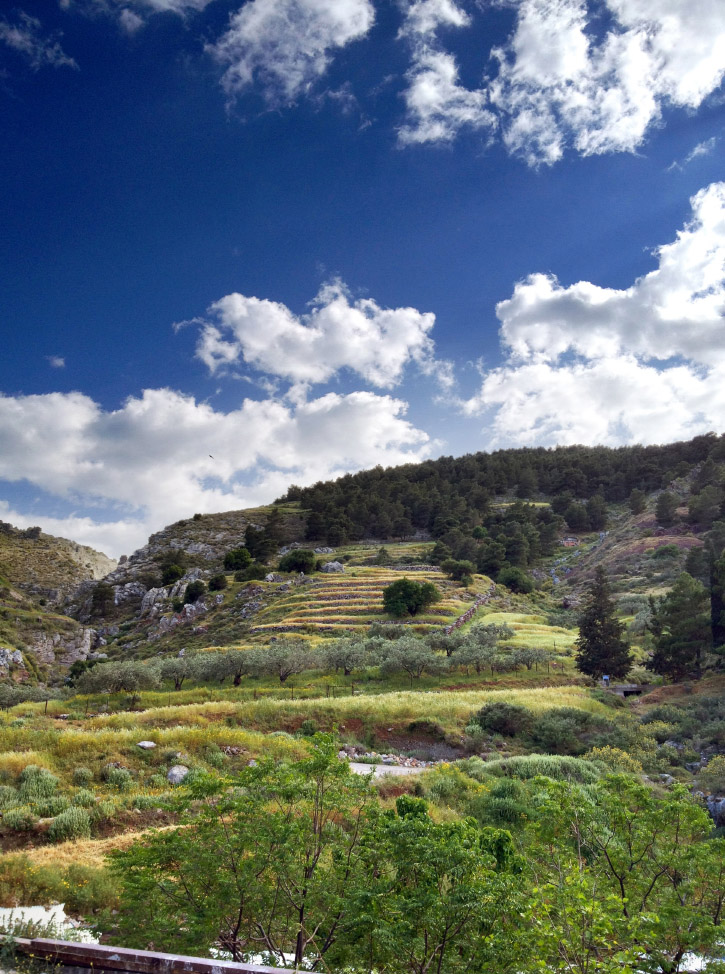 A flowering hillside on Hydra. 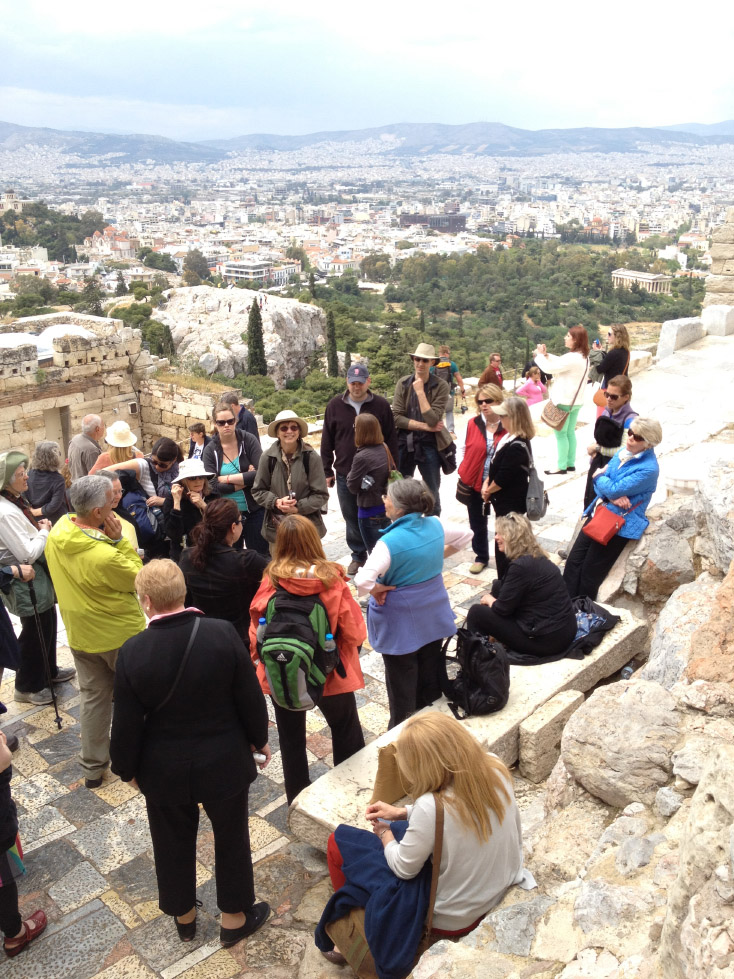 Gathered on the Acropolis. 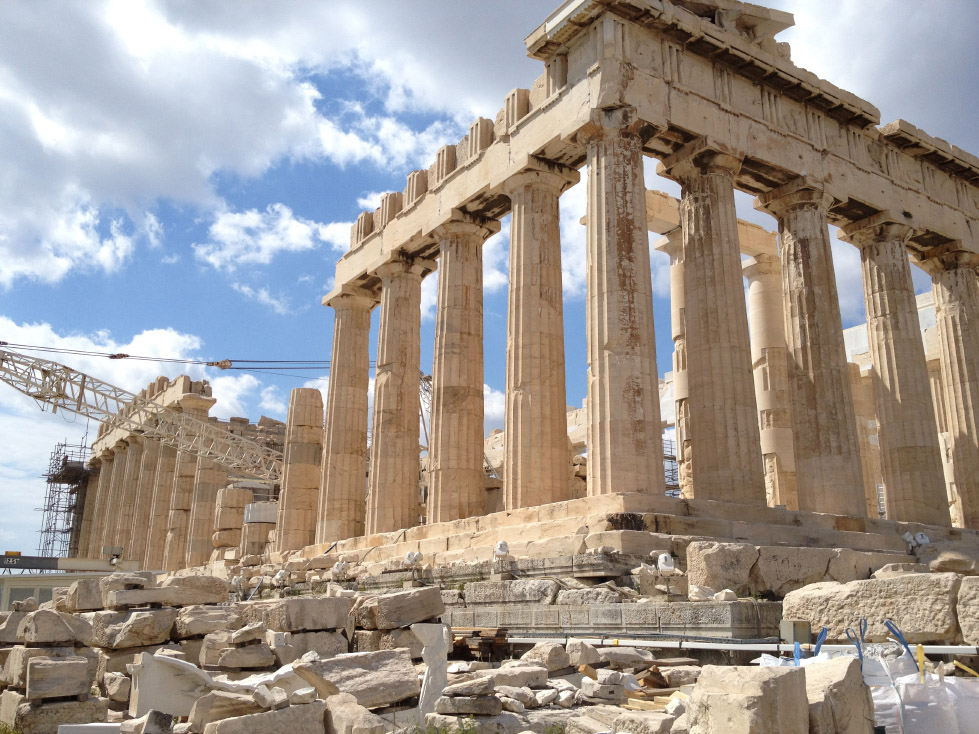 Our last three days were spent on the island of Santorini, an optional extension to the trip and one we were SO, SO glad we opted for. Who wouldn’t fall in love with a place this beautiful — even if it sits atop an active volcano that might well have caused the demise of Crete’s Minoan civilization AND spawned the legend of Atlantis? It’s hard to worry about ANYTHING (volcanoes or otherwise) when you’re in a place that looks like this… 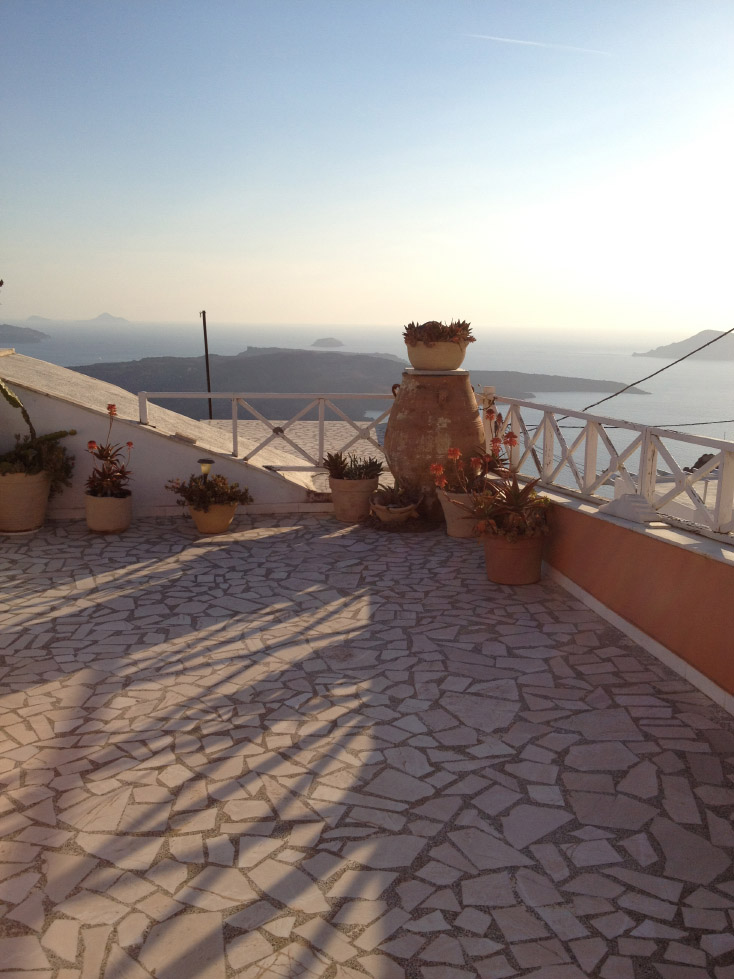 Shadows at sunset on Santorini, overlooking the caldera. 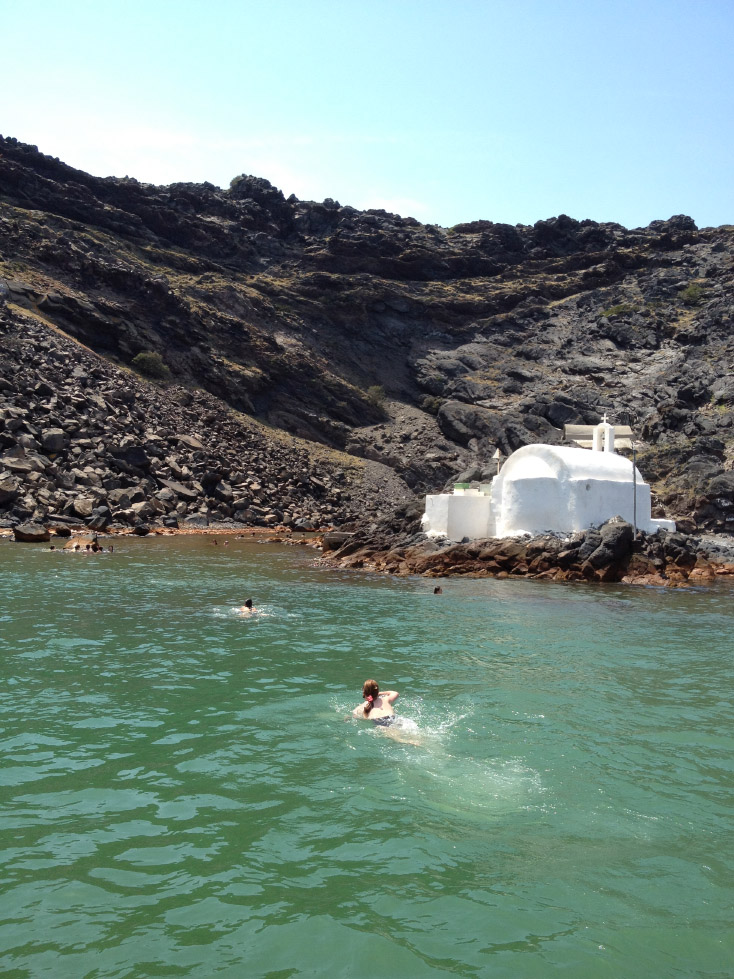 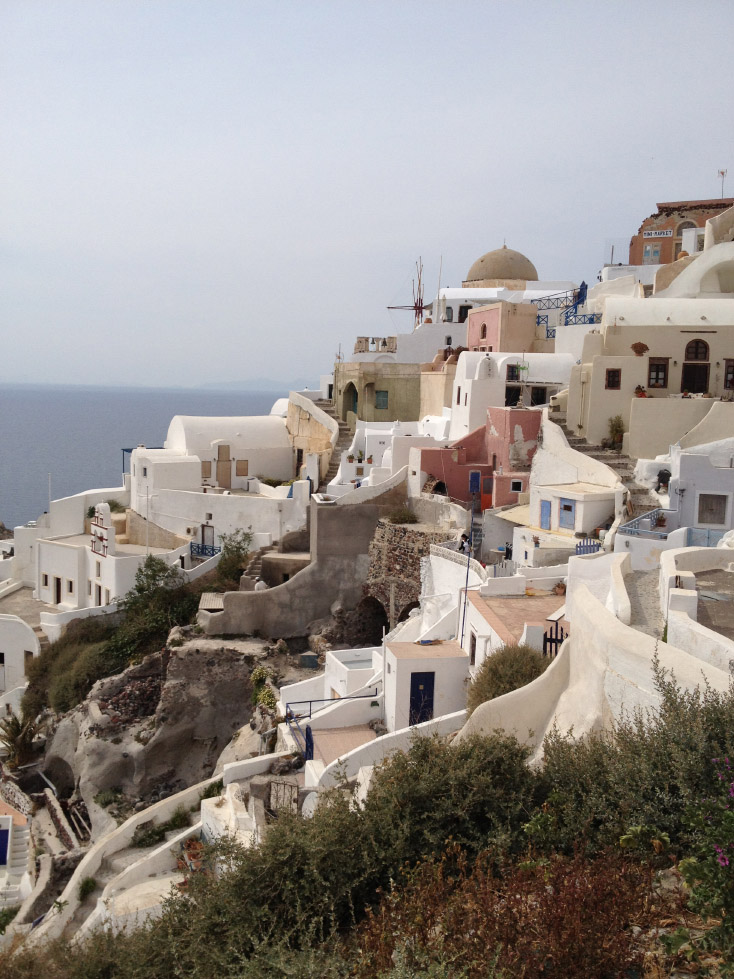 The village of Oia, on Santorini. 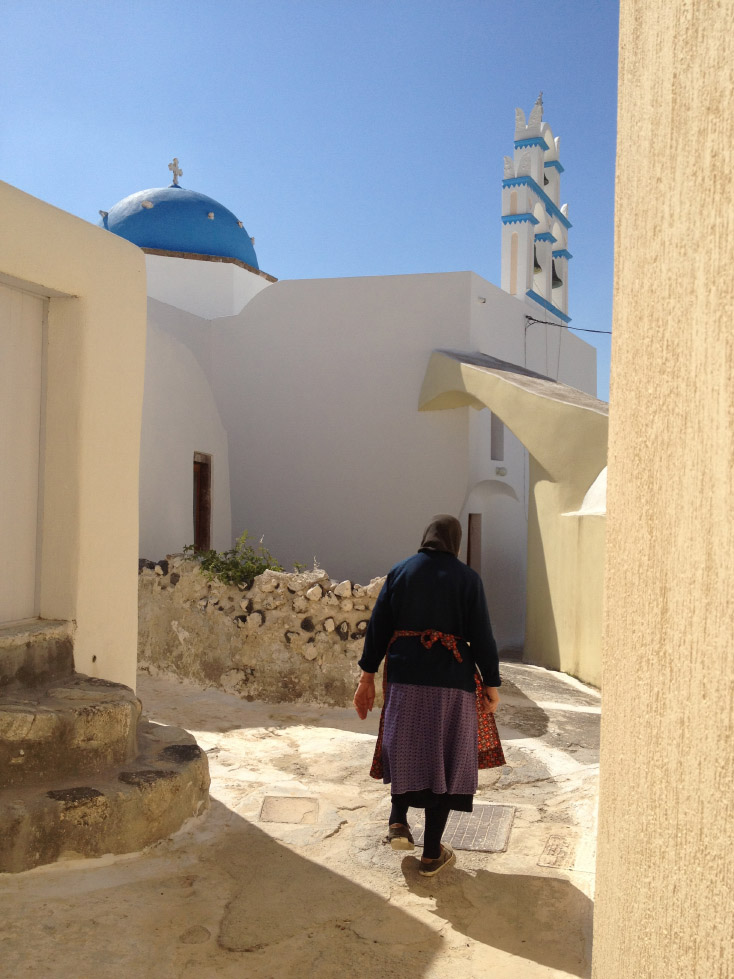 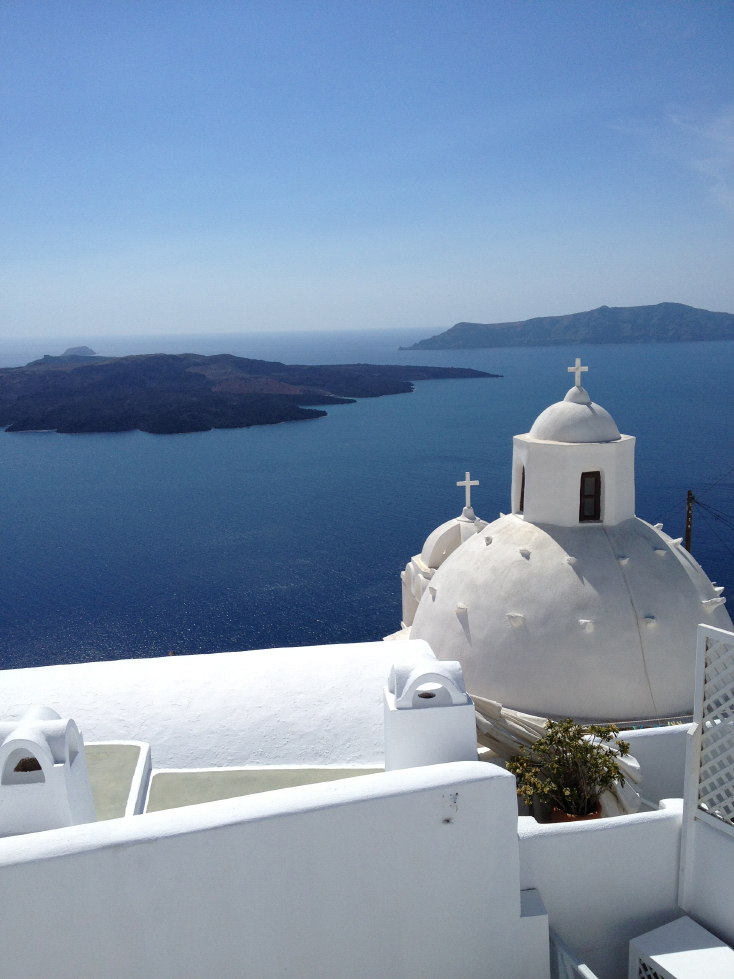 One of Fira’s many churches. 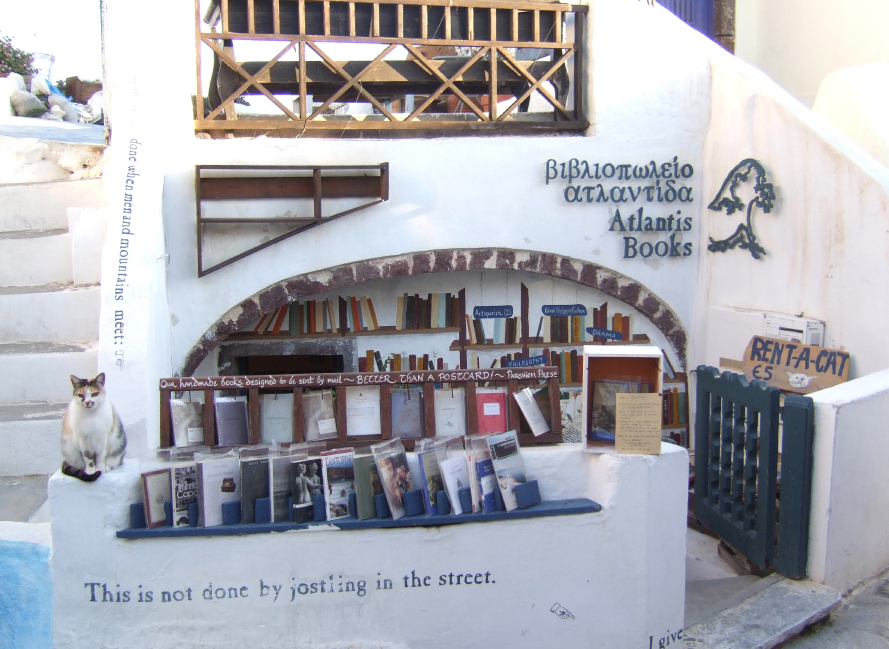 And this is just a tiny taste of what the trip had to offer. There are a couple thousand more photos where these came from (seriously), and just as many memories, one favorite of which was convincing Gareth to let us tie him to the mast (or pretend to) as we sailed off to hike Santorini’s volcano. It seemed like a necessary addition to our odyssey. 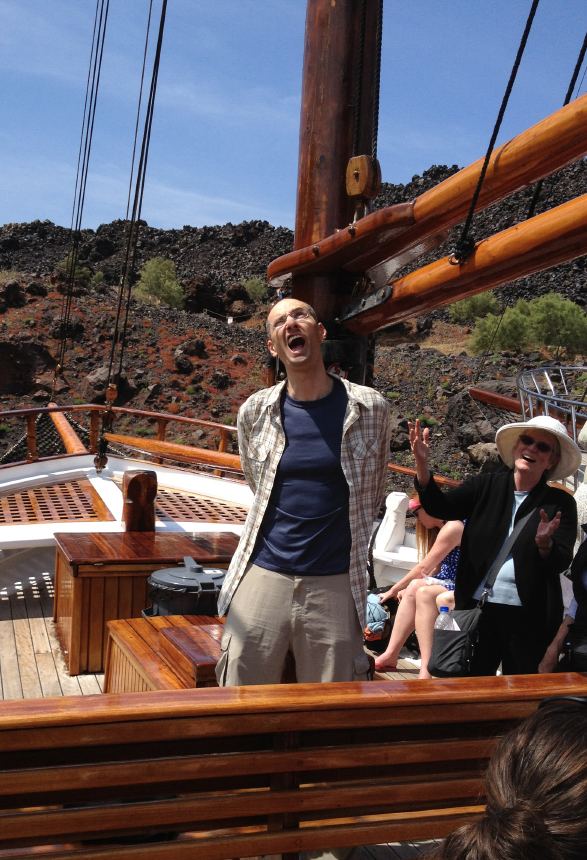 So, that’s it — the remarkable trip we took as part of the Greece Online course, which I highly, HIGHLY recommend to anyone looking for a smart, memorable, bookish introduction to Greece. The course is full of wise minds and kid literati (next year’s lecturers include Ashley Bryan, Suzanne Fisher Staples, and K.T. Horning). The tour is a guided trip through Greece’s most interesting history, includes the added expertise of a writer or artist in residence (Gareth gave a lecture, taught a watercolor workshop, and sketched almost constantly) but it still feels like a relaxing vacation.
In keeping with blogging protocol I will add that no one is paying me to endorse this trip, and the trip itself was not a freebie for me. I paid, in full, for everything you’ve seen and heard about in this post, and I can honestly tell you it was worth every penny. I’m SO grateful to have had this experience, and to have shared it with an terrific, open-minded, fun-loving, insightful bunch of teachers, librarians, book reviewers, and the like. I made fast friends on this trip and wish I could go on more adventures with the same wonderful crew!
For more information about Greece Online, read the details on the Examined Life website. You can also reach out to Connie Carven through the info. on the site’s Contact Us page if you have questions or want to be notified when next year’s course and travel plans are finalized. I don’t know if I’ll make it on the 2014 trip, but I hope and predict that this will NOT be my last Greece Online adventure. I hope many of you will be inspired to go too! In the meantime, let me know what YOUR favorite spots in Greece have been, so that I can add those to my list of future destinations! 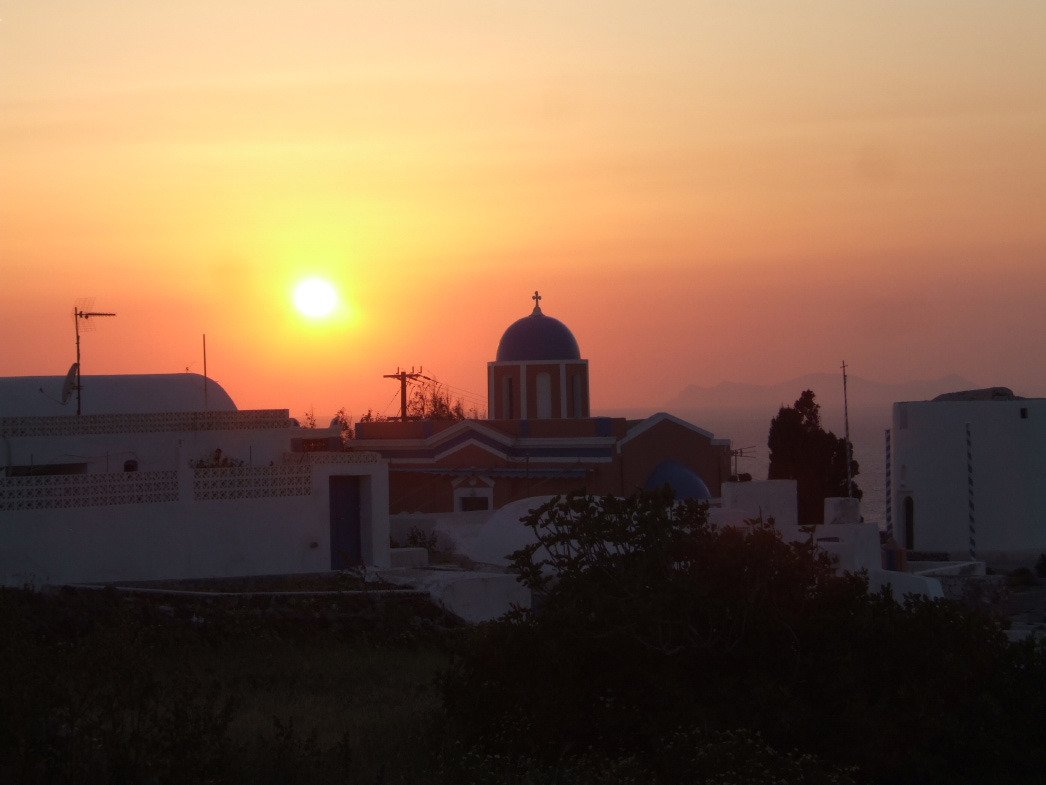