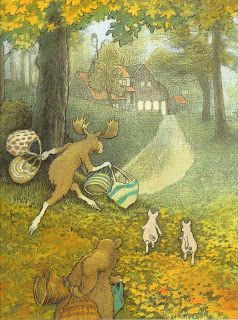 When you see something shockingly wrong it sets in motion a chain of cognitive events. Take the case of A House in the Woods, for example.

A House in the Woods is my favorite picture book to sell at the store. It is a handselling tour de force. Exquisitely illustrated, this story of friends building a house in the woods is the perfect choice for so many picture book needs. It has a genial, wry, comforting warmth that pervades every page filled with problem solving, building, and a togetherness that celebrates the value of work, community, friendship and follow-through. What begins as a very full day of hard work ends with our tired friends heading upstairs, red hot water bottle in tow, for bedtime. It is one of the most engaging and comforting books in all the world. Timeless too.

So what is wrong with this picture? 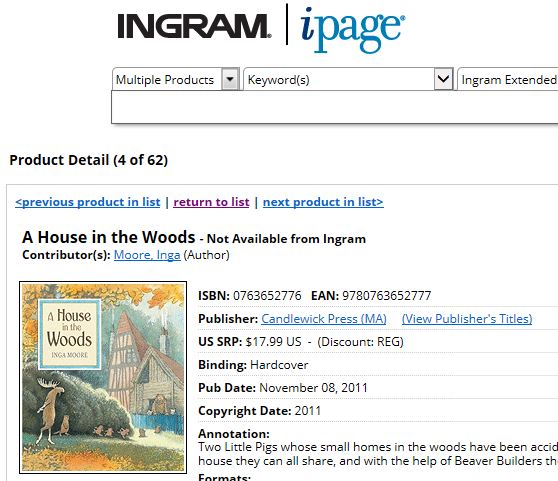 The Not Available from Ingram status for a book distributed by a major house is often the harbinger of going out of print due to lack of sales. Though we have all been sad to see a beloved book not selling enough copies to stay in print, I was certain that A House in the Woods was not one of them. I checked my own sales numbers. We had sold 160 copies since 2011 and 20 in 2018, all off the floor. It was a very strong steady seller, unfazed by the passage of time. The Not Available from Ingram status wasn’t a case for lamentation — it didn’t make sense. 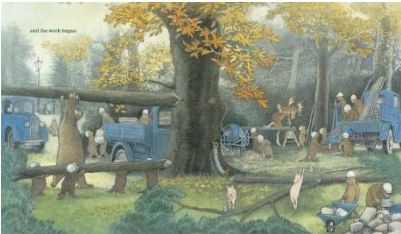 One thing I noted was that January 2019 was the last time I had received stock and that it had been kicking around on backorder without my noticing it until recently. Clearly something was amiss, and I checked in with my pal Elise at Candlewick to see if they had stock and if they knew why it was no longer available at Ingram. It turned out that Candlewick had been unaware of the book’s unhappy status. It had been out of stock with Candlewick for quite a while but was back on hand. On learning of the status Candlewick’s Ingram account manager asked Ingram to plug the book back in.

I was interested in learning why the status had occurred in the first place and made inquiries. It turns out that Ingram’s system automatically deactivates a title when too many backorders cancel out in a row. .Candlewick had run out of the title at the end of 2018 and unfilled backorder requests began piling up at Ingram. Ironically, it turns out that it was the steady demand for the book during a prolonged period when it was out of stock which caused it to be de-activated.

This could have become a self-fulfilling prophecy if left in place but, just as with the story itself, with a little effort everything turned out well in the end. If you go on ipage now you will can regale your eyes with this happy ending.