I worked at the bookstore again this past weekend and had a brief moment to look around and really take it in. Elizabeth and I started the store in 1996 in a small building in Charlotte, Vt. Then in 2006 we moved to a new store double the size in a town twice as big. Our store has always had a cozy, book-nook feel to it, where every age reader had a place to browse. In 2016 I retired from bookselling. Twenty years of retail felt like plenty to me. Now, as a customer and occasional bookseller I can see the differences Elizabeth has made to the store, and they’re so good.

I tend to say no first to most things, then I slowly get to yes. This was never more evident than moving sections around. I hated it and would often prefer to stay with the sections we had in the areas they were. Elizabeth, on the other hand, would throw comments out like, “What if we just 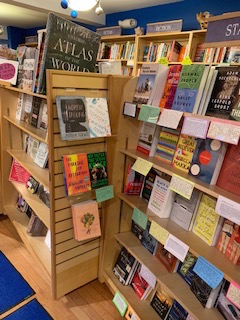 moved non-fiction over and swapped it with staff picks?” No, no and no. Now that I’m not the voice of negativity, I’ve noticed that many sections have moved for the better. Displays are different, too.There is an aisle going down the store, one side opens onto the nooks of the kids’ section and the other side had adult books in bookcases going end to end. Elizabeth made this nifty change so now instead walls of books, she’s made display space that highlights the books in the case. It’s a small change, but damn, it’s kinda brilliant. And books from the aisle are selling quite well when I’m working.

Cookbooks is often a section that needs room to browse. They were in the aisle leading to the register. The books sold well, but then Elizabeth moved them. In order to move them she reorganized the entire back section of the store. And, no surprise here, it’s all working better. Where I sucked at creating flow, she excels. Now especially during the holidays, shoppers have space away from the busy aisle to really look at cookbooks.

Another marvel has been gift certificates. What once was a cumbersome, multi-step process that involved our cash register, a web site and complicated end of day process is now completely streamlined in the cash register system. This process is not only faster, it’s actually now coded to the customer. This means should someone lose a gift card, which happens a lot, it’s a far faster process to look up the purchasing customer and get the card number. The old way involved phone calls, endless reports with best guessed dates of purchase, and gift card numbers that never seemed to line up with the report numbers.

It turns out I suck at systems, too. Several longtime staffers have shared that my lack of interest and follow through on systems is largely why we never really had any. Turns out they’re not only important, they make you a better run store. Now there is a system for mail order that involves more than me trying to remember when I popped a book in the mail. At first it seems onerous, if you’re me. You’ve got to to fill out a sheet and attach the tracking number. This is not hard, but I balked. For years. The other day when I was working, someone called about their mail order and in less than a minute I was able to find the tracking number, track it, and tell the customer the book was out for delivery that very day.

When I was at the Flying Pig there was very much a seat-of-pants vibe that I thrived on. Now, it feels like a store run by a seasoned owner whose staff innovates and continues to provide amazing service to all manner of book lovers. I’m working a bunch this month, and I’ll try hard to not bring chaos with me.

One thought on “Change Is Definitely Good”