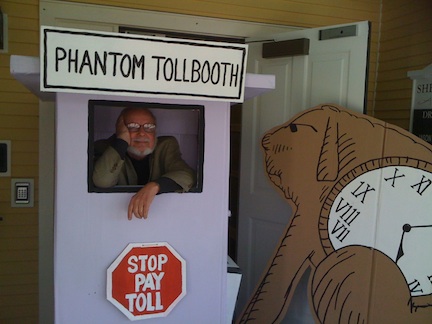 After a long day, Norton Juster contemplates a new career in high(way) finance

This was the question we heard most often when customers called to reserve seats for the event:

“But,” they’d persist, in case we were somehow misunderstanding, “THE Norton Juster? The actual same person who wrote The Phantom Tollbooth?”

The disbelief and awe in their voices would have made the author blush. “Yes,” we were delighted to reassure the callers. “It’s the very same man.”

“We really, really are.”

It wasn’t hard to understand their astonishment. We ourselves could hardly believe it, and we’d hosted the man before. When a book is as perfect and enduring as The Phantom Tollbooth, it’s a challenge to imagine some regular mortal just typing it out on bond paper. It has its own authority and integrity and apparent inevitability, like a piece of music that doesn’t seem created so much as plucked from the ether. (Ahem. You may have guessed by now that the book was a personal literary touchstone for me. But 49 years of in-print popularity leads me to suspect I’m not alone.) Mr. Juster’s appearance was scheduled for 10/10/10 (the Mathmagician certainly would have noticed this date’s deliciousness). Our Flying Pig Loft holds up to 80 people comfortably, especially if we have kids sit on quilts on the floor in the front, where they pack in quite nicely. We made the reading a ticketed event. The purchase of The Odious Ogre, Norton Juster’s new worth-the-wait collaboration with Jules Feiffer, bought families automatic entrance. We did an email blast, made signboards, and posted signs and calendar listings in the store and elsewhere, as well as on our website. We’ve found one of the best new ways of getting the word out about events is through the online Neighborhood Forums we belong to. These are online networks set up regionally for neighbors to share news both personal (“Lost cat!”) and professional. We took reservations until we filled up a little beyond full capacity, knowing that a few attendees would likely suffer last-minute changes of plans due to sick kids or Columbus Day weekend surprises.

We recruited a Charlotte, Vt., dad whose lovely, wonderful daughters we’ve seen grow up over years, to help us with some special decorations. In short order, the talented graphic designer and artist Tom Baginski, with help from his equally talented and lovely wife, Allison, constructed a purple tollbooth complete with ‘highway’ signs. When the big day arrived, we were ready! Tom made the store exterior so much FUN with his amazing pieces.

The token (aka fender washer)

Norton Juster at table, top left. It's hard to get good establishing pix in this room.

We bought fender washers from the hardware store, so that as families came through the tollbooth, they received a “token” in exchange for their names. We crossed off reserved guests from our list, and advised unregistered guests to wait just a few moments while we checked on seating. Admitted guests dropped their tokens into the slot and went upstairs to find seats, browse among the books. In addition to loads of The Odious Ogre, we carried The Phantom Tollbooth in paperback and hardcover, Sourpuss and Sweetie Pie, and The Dot and the Line, which is one of my all-time favorite books to give to friends of all ages. The Hello, Goodbye Window was a little harder to commandeer copies of, currently living in a between-printings fugue state. Book sales were brisk—hooray! always a happy occasion—and people were especially delighted to find the hardcover Phantom Tollbooths. Booksellers planning to host Norton Juster should make sure to have plenty of these on hand. At our store, the hardcovers outsold the paperbacks at least 6:1.

NJ shares the indignity of posing for a photo shoot in which he, not his character, cowers under the giant hand.

After introducing THE Norton Juster to a crowd of more than 70 fans, we sat back, beaming, and listened to his sonorous voice read from the beginning of The Odious Ogre (which is full of fabulous words kids will want to roll off their own tongues, too), then share some of its backstory. He spoke about his beginnings as a writer, his father’s relentless but clever punning, and shared a bit about his experience in the Navy (where his whimsical drawings of elves and other fantastical creatures drew unwelcome attention from a commanding officer, who told him that Navy men don’t draw elves.) He spoke a bit about his career as an architect (fun fact: his firm designed the fabulous Eric Carle Museum), and how The Phantom Tollbooth got its start.

Norton Juster is a consummate raconteur; he tells a great anecdote, has a mischievous sense of humor, a vocabulary that delights, and a teasing wit. During his prior visit to the store, he told a story of introducing Jules Feiffer at some awards dinner—he hadn’t been asked to make the introduction, but saw a chance and seized the mic—with a completely fabricated life history for Feiffer that painted him, if memory serves, as a Horatio Alger-esque urchin who had overcome great odds to be there receiving his award. How can you not love a person who does that?!

The man himself answering questions.

Audience members asked questions, and received answers that pleased them. Talking about The Odious Ogre‘s origin, Mr. Juster endeared himself to all of the children in the audience by talking about playground bullies he had known (who didn’t in fact expire from exposure to kindness like The O.O. does, since real life doesn’t always turn out the way you might want it to). He revealed the friend for whom Milo in The Phantom Tollbooth is named, and he spoke about the playful way he and Jules F. would try to outwit each other during that book’s creation by writing things the other couldn’t draw, and vice versa. Feiffer hated drawing horses, so of course Juster put in a cavalry. (Feiffer purportedly proposed, “Couldn’t the armies of Wisdom ride giant cats instead?”) Juster described the Triple Demons of Compromise — one tall and thin, one short and fat, and the third exactly like the other two. (Draw that!) In revenge for these nefarious actions, Feiffer drew Juster as The Whetherman (p. 18 for those following along in their books).

NJ mugging for the camer-- I mean, taking Tock's token.

Those are just some of the marvelous tidbits we soaked up like happy sponges on Sunday. Kids and adults carried books, both brand-new and lovingly tattered, to be autographed, and when they headed downstairs to the bookstore afterward, our staffers said they’d never seen a happier crowd. They clearly felt the magic of being in the presence of both a man who is both a legendary storyteller and a very funny regular guy. (For the record, Norton Juster’s wife, Jeanne, is so wonderful and personable and sharp and kind; we think she’s the reason he hasn’t acquired a legendary ego, as well.)

For those of you who grew up reading and re-reading The Phantom Tollbooth, what mesmerized you about that book?